One of the Irving Police Department’s newest officers was brought to tears during her swearing-in ceremony. Her son who has been stationed overseas for the past two years showed up to pin her badge.

IRVING, Texas - One of the Irving Police Department’s newest officers was brought to tears during her swearing-in ceremony. Her son who has been stationed overseas for the past two years showed up to pin her badge.

“All swearing-in ceremonies are special but every once in a while one tugs at your heart strings a little more than others,” the department said.

The video shows Chief Jeff Spivey hand Officer Erika Benning’s badge to her husband so he could pin it on her uniform. But then her son, Sgt. Giovanni Pando, walks out from around the corner.

"I see him and it took me a good two seconds to realize that this was real," Benning said.

The new officer burst into tears when she finally saw her son. The explosive ordiance disposal specialist has been stationed overseas with the United States Army and the two have not seen each other in over two years, police said.

Officer Benning said that ever since she was a kid, she’s wanted to be a cop. She thought the only thing missing on her big day was her child.

"I know the feeling she had for me when I graduated my school in the Army," Pando said.

After a minute or two of hugs, Officer Benning’s son proudly pins the badge on his mother’s uniform. It’s a surprise she surely will never forget. 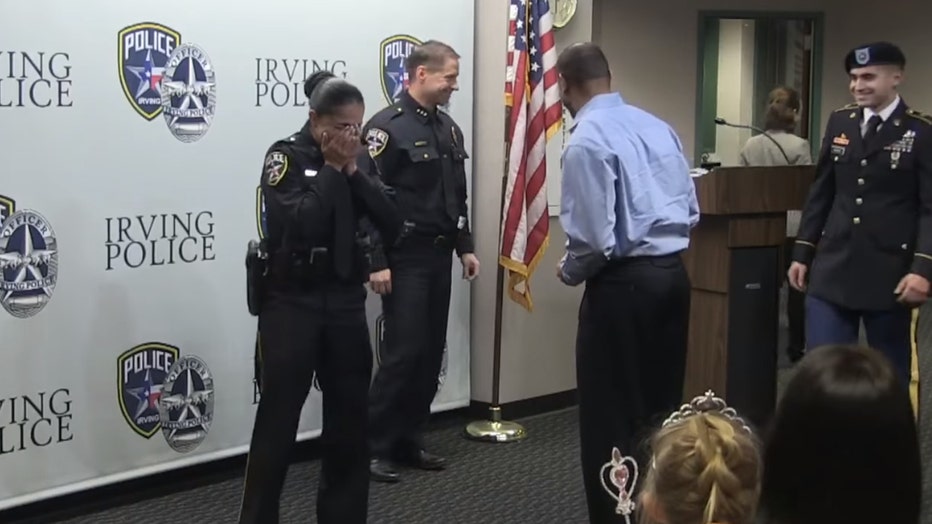 He said the surprise was planned for several months.

“You're trying to have a normal conversation, check up on her and not slip up like, ‘Hey, I'll be there next week to see you," Pando said.

As they inched closer to the ceremony, he couldn't risk spoiling the big reveal.

"Now I understand why I didn't hear from him for the whole week," Benning said. "I actually didn't speak to him for a whole week, and I was like, ‘Oh, OK. I guess he's busy.’"

But he was only busy working with his father and Irving PD to be the one to give Benning her badge.

"It was difficult. You know,” Benning’s husband, Corey, said. “Obviously, having a wife as a police officer doesn't make it easier to keep a secret."

"We've always been a family, so him leaving and not seeing him for two years was very tough, and then knowing that he wasn't going to be here to celebrate that special moment was really hard for me," Officer Benning said.

It was an overwhelming surprise that brought their family together.

"And then I said, ‘Don't cry, don't cry,’ and I don't know what happened. And then it was just tears. I cried," Benning recalled. "I wanted to make sure I kept my composure and not pass out because that's really what was happening. The vest just felt so tight. Everything just felt so tight and heavy."