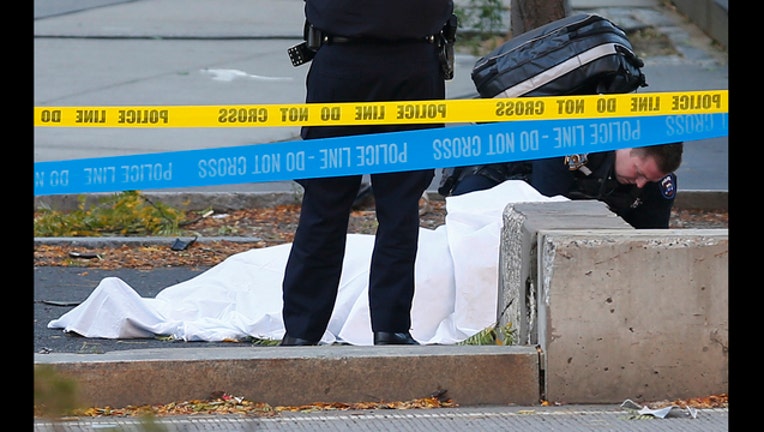 A paramedic looks at a body covered under a white sheet along the bike path Tuesday Oct. 31, 2017, in New York. A motorist drove onto a busy bicycle path near the World Trade Center memorial and struck several people Tuesday, police and witnesses sai

New York Gov. Cuomo says the vehicle driving on bike path in Lower Manhattan was a 'lone wolf' attack and there was no evidence it was part of a wider plot.

A man in a rented pickup truck drove onto a busy bicycle path near the World Trade Center memorial Tuesday, killing at least eight people and injuring several others in what the mayor called "a particularly cowardly act of terror."

The 29-year-old driver was shot by police after jumping out of the truck with what turned out to be a fake gun in each hand, officials said. He was taken into custody. His condition was not immediately disclosed.

Cuomo stressed Wednesday on "CBS This Morning" that the investigation is ongoing.

Law enforcers are working to determine what led the pickup truck driver to plow down people on the bike path on Tuesday afternoon. The driver is in critical condition after police shot him in the abdomen.

Cuomo calls the driver a "depraved coward," and says the attack "did not instill terror" among hardy New Yorkers.