TAMPA, Fla. - Meteorologists with the National Oceanic and Atmospheric Administration have become the latest forecasters to warn that the upcoming hurricane season will likely be busier than average.

Their prediction cites a combination of several factors, including:

- Lack of an El Nino pattern to suppress hurricane activity 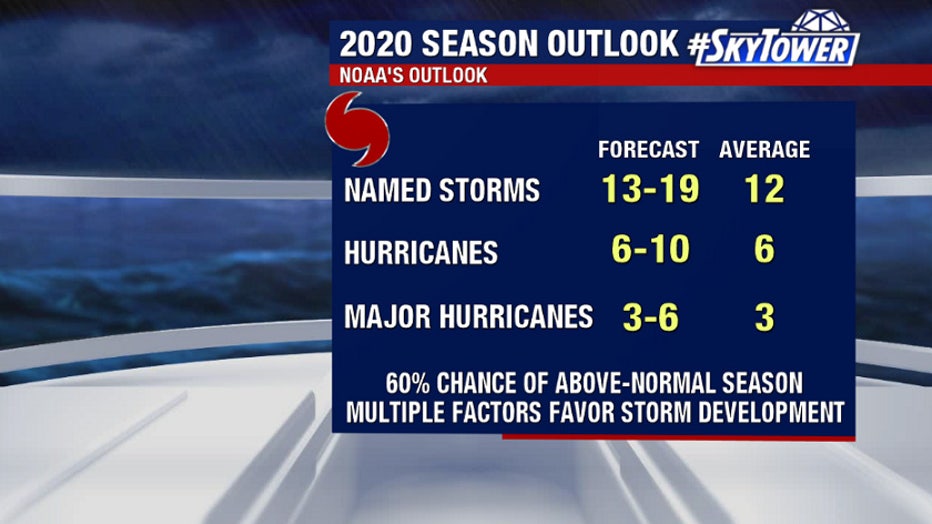 According to a press release, NOAA’s Climate Prediction Center is forecasting a likely range of 13 to 19 named storms (winds of 39 mph or higher), of which 6 to 10 could become hurricanes (winds of 74 mph or higher).

That includes three to six major hurricanes, which are Category 3, 4 or 5 and have with winds of 111 mph or higher.

Though the official start of hurricane season is June 1, a pre-season tropical storm has already formed. Tropical Storm Arthur spun up off the east coast of Florida last week and swept by the coast of North Carolina before heading out to sea.

It’s the fifth year in a row that a storm has formed before June 1, but forecasters say that alone does not have any indication of the rest of the season’s activity.

And, meteorologists point out, it’s impossible to predict where or when any of the hurricanes will hit, if at all.

“As always, this doesn't change anything. We prepare the same way every year,” FOX 13 meteorologist Tyler Eliasen noted. “This is a forecast for activity and says nothing about landfalls.”

FOX 13 meteorologist Jim Weber has a look back at the 2019 season's storms.

NOAA’s forecast made special note of the impact that COVID-19 would have on hurricane season. Experts have advised against mass gatherings of the kind that would normally happen during evacuations and in shelters.

Secretary of Commerce Wilbur Ross urged citizens not to lose sight of storm season amid the pandemic.

“As Americans focus their attention on a safe and healthy reopening of our country, it remains critically important that we also remember to make the necessary preparations for the upcoming hurricane season,” he said.

“Natural disasters won’t wait, so I encourage you to keep COVID-19 in mind when revising or making your plan for you and your loved ones, and don’t forget your pets,” added Carlos Castillo, acting deputy administrator for resilience at FEMA.

Emergency planners in the state of Florida have already said they were taking the coronavirus into account, but did not say specifically how.