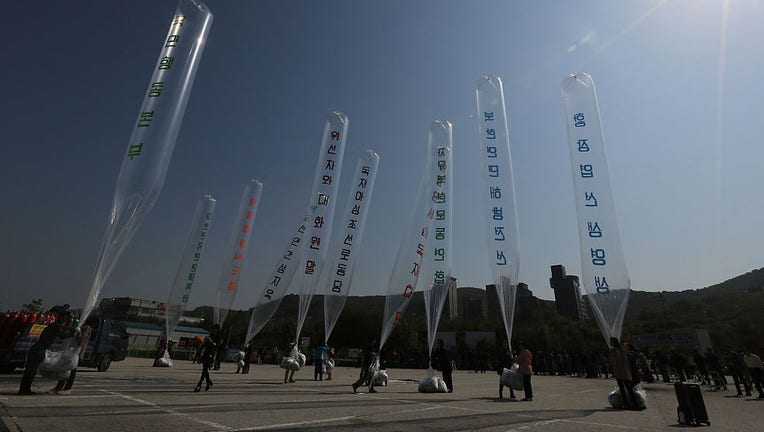 SEOUL, South Korea - North Korea suggested Friday its COVID-19 outbreak began in people who had contact with balloons flown from South Korea — a highly questionable claim that appeared to be an attempt to hold its rival responsible amid increasing tensions over its nuclear program.

Activists for years have flown balloons across the border to distribute hundreds of thousands of propaganda leaflets critical of North Korean leader Kim Jong Un, and North Korea has often expressed fury at the activists and at South Korea’s leadership for not stopping them.

Global health authorities say the coronavirus is spread by people in close contact who inhale airborne droplets and it’s more likely to occur in enclosed, poorly ventilated spaces than outdoors. South Korea’s Unification Ministry said there was no chance South Korean balloons might have spread the virus to North Korea.

Ties between the Koreas remain strained amid a long-running stalemate in U.S.-led diplomacy on persuading North Korea to abandon its nuclear ambitions in return for economic and political benefits. South Korean and U.S. officials have recently said North Korea is ready for its first nuclear test in five years amid its torrid run of weapons tests this year.

The state media report said North Korea’s epidemic prevention center had found infection clusters in the town of Ipho near its southeastern border with South Korea and that some Ipho residents with feverish symptoms traveled to Pyongyang. The center said an 18-year-old soldier and a 5-year kindergartener had contact with "alien things" in the town in early April and later tested positive for the omicron variant.

In what it called "an emergency instruction," the epidemic prevention center ordered officials to "to vigilantly deal with alien things coming by wind and other climate phenomena and balloons" along the inter-Korean border and trace their sources to the last. It also stressed that anyone finding "alien things" must notify authorities immediately so they could be removed.

The reports did not specify what the "alien things" were. But laying the blame on things flown across the border likely is a way to ease public complaints about its handling of the pandemic while repeating its objections to the ballooning activities of North Korean defectors and activists in South Korea, observers say.

Leafletting campaigns were largely halted after South Korea's previous liberal government passed a law criminalizing them, and there were no public balloon attempts made in early April.

An activist who is standing trial for past activities flew balloons carrying propaganda leaflets across the border in late April after halting them for a year. Park Sang-hak floated balloons twice in June, switching the cargo on those attempts to COVID-19 relief items such as masks and painkillers.

Cha also said the consensus among South Korean health officials and World Health Organization experts is that infections via contact with the virus on the surface of materials is virtually impossible.

In its previous dubious statements on COVID-19, North Korea also claimed the virus could spread through falling snow or migratory birds. Its pandemic-related restrictions even included strict bans on entering seawater.

"For the first time now, in this pandemic, nearly every American can now have access to life-saving vaccines. And we're ready," President Joe Biden said on Tuesday from Washington, D.C.

Analyst Cheong Seong-Chang at South Korea’s Sejong Institute said North Korea wants its people to believe the coronavirus originated from leaflets, U.S. dollars or other materials carried across the border by the balloons.

North Korea is infuriated by the leafletting campaign because it’s designed to undermine Kim’s authoritarian rule over a population that has little access to outside information. In 2014, North Korea fired at propaganda balloons flying toward its territory and South Korea returned fire, though there were no casualties.

North Korea's latest announcement on the virus contradicts the outside view that it spread after North Korea briefly reopened its northern border with China to freight traffic in January and it surged further following a military parade and other large-scale events in Pyongyang in April. Some outside experts have accused Kim of being largely responsible for the outbreak because he organized those events to boost public loyalty to the ruling Kim family amid economic hardships.

After maintaining a widely disputed claim to be coronavirus-free for more than two years, North Korea on May 12 admitted to the COVID-19 outbreak, saying an unspecified number of people in Pyongyang were diagnosed with the omicron variant. 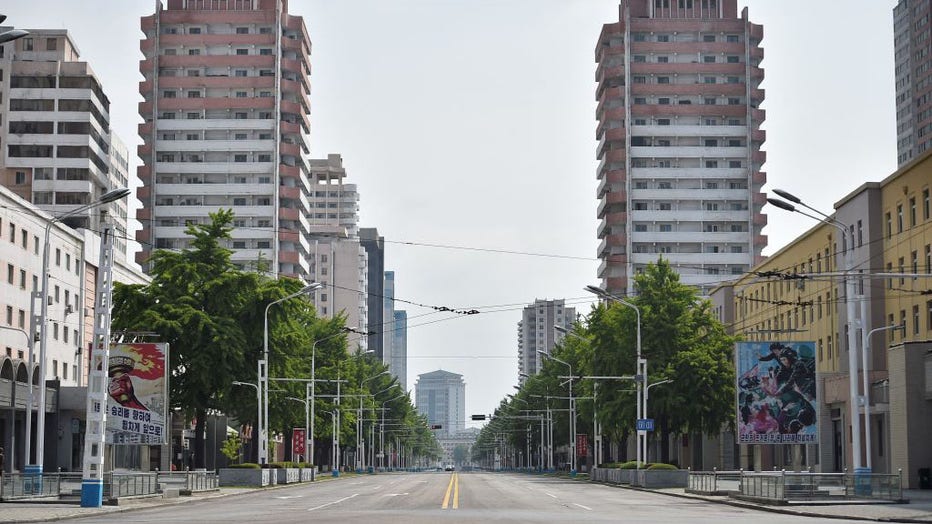 FILE IMAGE - This general view shows the empty streets near the Pyongyang Railway Station as people stay away due to a lockdown to curb the spread of COVID-19 in Pyongyang, North Korea, on May 27, 2022. (Photo by KIM WON JIN/AFP via Getty Images)

North Korea has since reported about 4.7 million fever cases out of its 26 million population but only identified a fraction of them as COVID-19. It says 73 people have died, an extremely low fatality rate. Both figures are believed to be manipulated by North Korea to keep its people vigilant against the virus and prevent any political damage to Kim.

RELATED: US to establish permanent military base in Poland