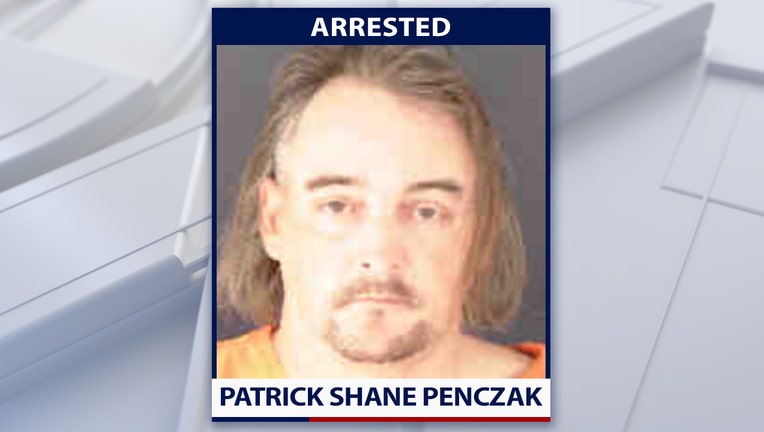 NORTH PORT, Fla. - North Port police arrested a man who they say pretended to be a teenage girl online and enticed his victim to take a nude photo – then blackmailed the child into performing disturbing sex acts by threatening to post his photo online.

Investigators said Penczak pretended to be a teenage girl from California on the online chat system Discord, and convinced a young boy to send a nude photo of himself in exchange for gift cards. The victim redeemed the gift cards on Roblox, an online gaming platform, and sent a nude photo to Penczak, believing the user to be a female around his age.

But once he sent the photo, the victim said the suspect threatened to post his photo online if he didn't do what "she" wanted.

Over the course of a year, the victim said he felt forced to log onto the online chat system and live stream disturbing sex acts, fearing that the suspect would expose his photo online if he refused to comply. He told investigators that if he did not log on, the suspect would text him repeatedly.

When police served their search warrant, they learned the 45-year-old suspect lives in his mother's North Port home.  His mother and her boyfriend both told police Penczak "plays video games and never leaves the house," adding that he "stays up at all hours of the night to play his games and to be on the internet."

NPPD is also working with the Department of Homeland Security Investigations nationally and out of Tampa because they believe there could be more victims.

RELATED: Texas teens accused of beating stepfather to death after they say he sexually abused their half-sister

"This arrest, led by North Port Police with support from HSI in Sarasota and Cherry Hill, New Jersey and the Camden County New Jersey Prosecutor’s Office, has made our local communities safer for everyone," said HSI Tampa Acting Assistant Special Agent in Charge Jennifer Silliman. "HSI will continue to investigate this case, working to identify victims of this child predator and ensure they get the needed support."

"We take all crimes seriously in the City of North Port but especially those involving children," said North Port Police Chief Todd Garrison. "Those who commit these types of crimes prey on those who cannot fully protect themselves. We will work night and day to protect our kids and hold those accountable who are looking to hurt them."

Penczak is currently being held in the Sarasota County Jail on no bond.