Kid and his pig win big at Manatee Co. fair

PALMETTO, Fla. - There was a record-breaking swine auction at the Manatee County Fair this year, but the pig that took nearly five times the normal price is only part of the story.

Larry Morris, 9, has captured the hearts of fairgoers for his perseverance on his journey to the fair.

Larry got his pig in October, and with the help of his Uncle Earl, raised it to show during the Manatee County Fair 4-H swine competition.

At the same time, Larry was still recovering from a kidney transplant, less than a year earlier. He fought chronic kidney disease since birth, but exactly one year after receiving a new kidney, Larry’s pig, Wilbur won second place.

Auctioneer Joey Davis knows Larry’s story and knew what he had to do as the 9-year-old and his pig stepped into the ring.

“I’ve got to let everyone know that if he can get through this then we are capable of a lot more than we do,” Davis said.

“Tough as nails right here,” he told the crowd before starting the bidding.

A pig Wilbur’s size will usually go for between $4 and $5, but the bids kept climbing as Larry and Wilbur paced the ring.

“I did this waving and everyone went ‘wahhhh’ and I was like ‘Wow! Wow!’” Larry recalled.

Then it hit an all-time high.

“He said yes, 25 dollars!” Davis shouted, pointing into the audience.

“To see someone go through something like that, a kidney transplant, and a year later he’s showing a hog. That shows determination,” Detwiler said. 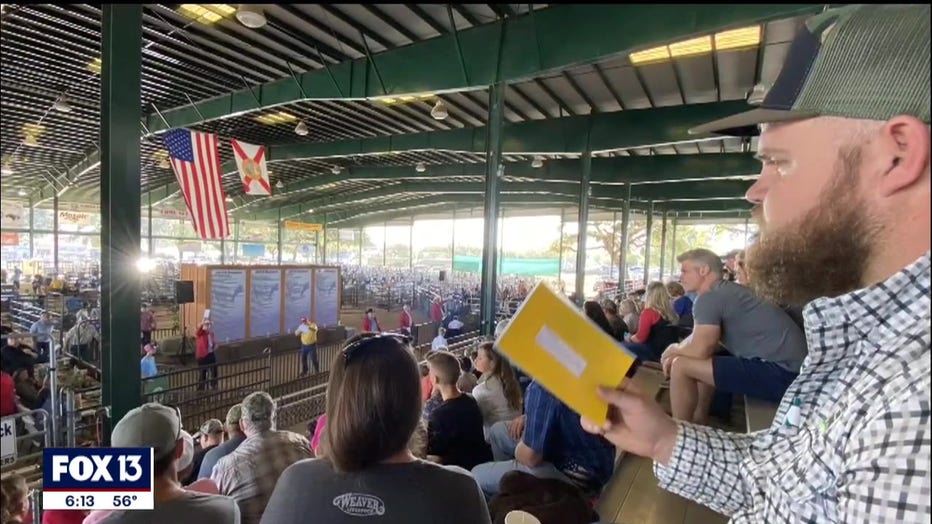 His determination is spreading and Larry hopes to be back next year.

“There was not a dry eye in the house, we were happy to have it,” Manatee County Fair President Jerry Wolfe said. “He’s an example to a lot of kids here that don’t have those difficulties.”

“It was pretty hard in the beginning, but it got easier in the end.”

Larry said he plans to help people out with some of his winnings. The rest, he will put in his bank account.