ST. PETERSBURG, Fla. - Dozens of nurses across Tampa Bay protested Friday what they fear are potential furloughs or layoffs, while shining a light on an issue healthcare workers are experiencing across the country.

According to National Nurses United, one of the largest nurses unions in the region, HCA is considering staffing cuts to help deal with the economic downturn due to the coronavirus pandemic.

"Bottom line is, this is about safety. They start cutting us during a global pandemic, everybody is going to be at risk," said Tammy Cihak, a registered nurse who was protesting outside St. Petersburg General Hospital. "Considering this is a global pandemic and everyone else in the world is hailing us as heroes, it's very disappointing." 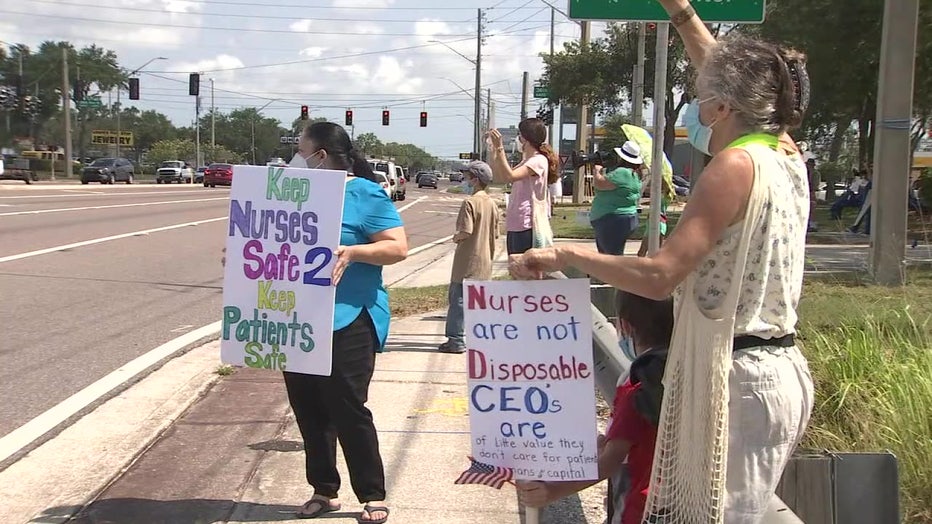 HCA told FOX 13 it has not considered furloughs or layoffs, but instead said a request that nurses forgo pay increases was denied by the union. An HCA spokesperson wrote, in part:

"At a time when hospitals across the country are struggling to survive and many are resorting to furloughs and layoffs, it is surprising and frankly disappointing that unions would demand pay raises for their members and may reject the continuation of a generous pay program that is providing continued paychecks for more the 100,000 colleagues."

A letter dated May 22 from St. Petersburg General Hospital CEO Ken Wicker and shared with FOX 13 by the nurse's union, however, indicates staffing might be affected.

"Given the union's decision, pandemic pay for nurses represented by NNOC will end as of June 6, and we may need to find other means to address reduced patient volumes, such as reassignments, reduction in hours, and layoffs," Wicker wrote. 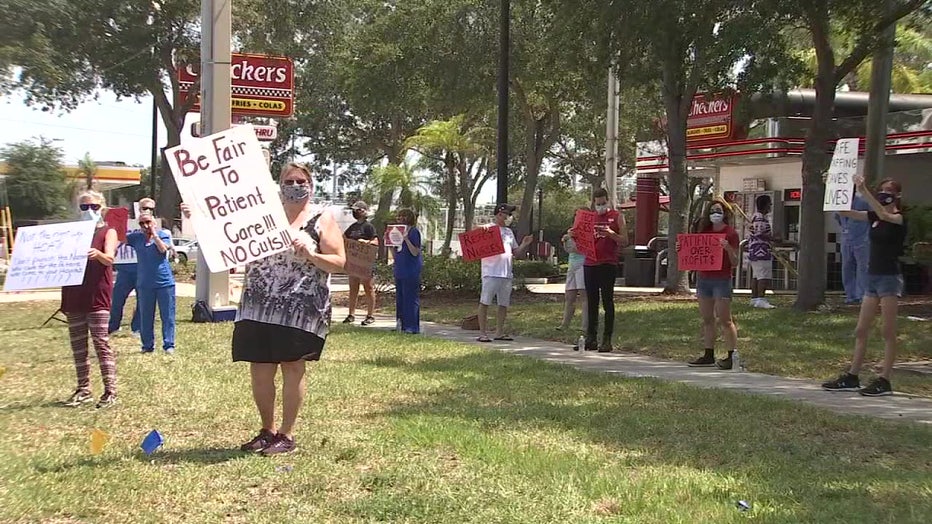 Nationwide, a lot of hospitals are confirming furloughs and layoffs. According to Becker's Hospital Review, which tracks the industry, nearly 300 hospitals have implemented furloughs.

"To make up for lost revenues, hospitals -- like anybody else -- are looking to be a little more controlling in their resource allocations so they say, 'maybe we don't need as many nurses as we used to have or as many lab techs as we used to have,'" said Dr. Jay Wolfson, an associate vice president with USF Health, adding nurses are right to be concerned. "Nurses have always been very concerned about assuring that there is that staffing so that they don't get beaten up."

Wolfson said healthcare workers everywhere are still dealing with issues with personal protective equipment, or PPE, such as masks and gowns.

"PPE are not being made readily available to them. They're concerned about the quality still of some of the PPE," he continued.

Wolfson said it'll likely take a long time before the industry determines how best to return to normal and how that happens depends on each hospital and each community.