Man who shot at officer linked to multiple incidents in Hillsborough Co.

TAMPA, Fla. - A 40-minute shooting spree ended with a Tampa police officer being injured and a suspect being taken into custody, according to the Tampa Police Department.

TPD says they got the first 911 call just before 7 p.m. Thursday regarding someone shooting from a moving vehicle on Interstate 275 near West Shore Boulevard. Investigators said two victims near that location were struck and had non-life-threatening injuries.

Other callers then reported shots being fired in the area of Reo Street and Cypress Street.

Jamel Laneé with TPD said the suspect was apparently driving around, "shooting randomly, at vehicles, at people" in Tampa, Hillsborough County, and on the interstate.

As Tampa officers responded to calls inside the city, deputies with the Hillsborough County Sheriff's Office were dispatched to three reports of a shooter in the county.

Dispatchers got their first call just before 7:30 from a person who saw shots being fired from a vehicle in the direction of children at a park near the 6300 block of Tadpole Lane in the Egypt Lake-Leto area. Deputies said it did not appear anyone in the area was hit by gunfire.

Minutes later, shots were fired at vehicles near the intersection of W Sligh Ave and N Habana Ave. Two people were hit. It was unclear if they were inside the same vehicle. Their injuries were reportedly not life-threatening.

A few minutes later, a driver said their tires went flat after being shot from a passing vehicle at N Dale Mabry Hwy and Lambright St. The driver was not hurt.

It was about 40 minutes after the first 911 call when a 24-year-old Tampa police officer saw a vehicle on Hillsborough Ave., at N 43rd Street, matching the description of the one involved in multiple shootings.

The officer tried to pull the vehicle over, but the driver got out and started firing shots. 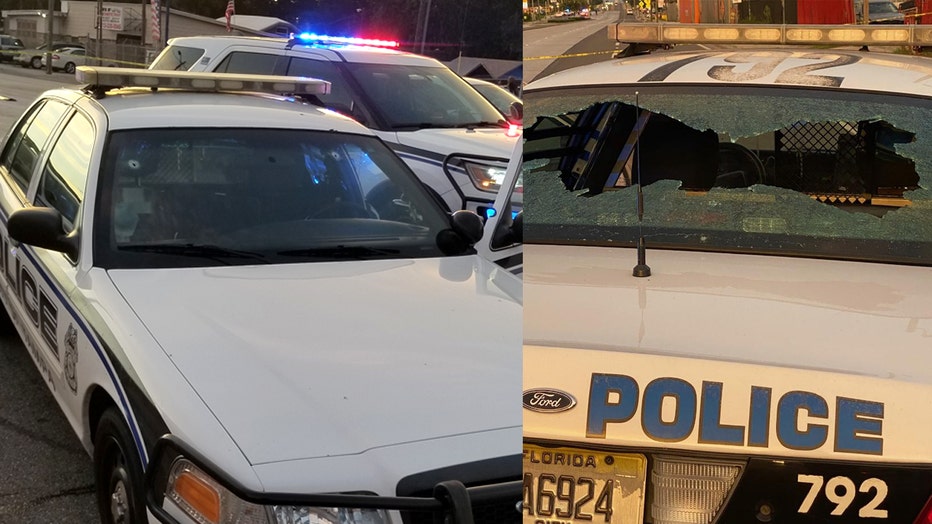 The officer began backing up his cruiser but bullets pierced the windshield and shattered the rear window of his cruiser. Previous reports indicated the officer was hit by the gunfire, but investigators later said he may have been injured by shattered glass.

Laneé said the 31-year-old suspect ran toward the Brandywine Apartments on N 40th Ave. A K-9 tracked the suspect to a third-floor landing and he was taken into custody. The suspect's identity was not released.

Suspect tracked to apartments after shooting at officer: TPD

Meanwhile, the view from SkyFOX showed dozens of police patrol vehicles parked along Hillsborough Ave. just after 9 p.m. The section of Hillsborough Ave. between 40th and 43rd remained closed for the investigation.

Tampa police said the 24-year-old officer had non-life-threatening injuries and Chief Brian Dugan reportedly visited with and spoke to him at the hospital.