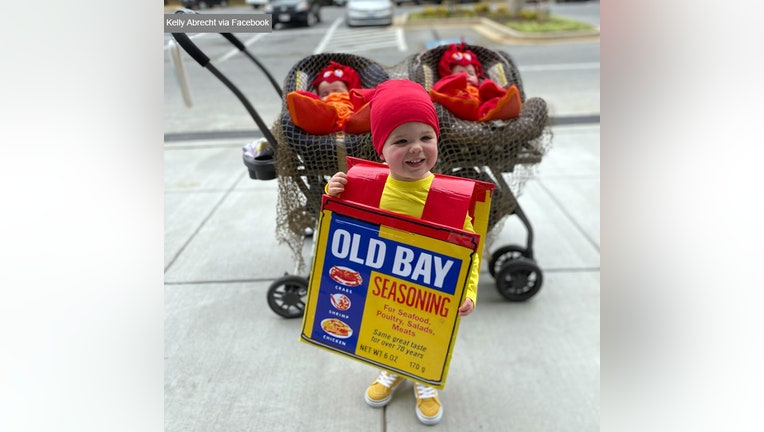 Declan dressed as Old Bay Seasoning and his twin siblings, Trevor and Adeline dressed as crabs.

OWINGS MILLS, Md. - If Halloween 2019 has taught us anything, it’s that parents have really stepped up the kid costume game.

There was the adorable 3-year-old, who despite his height, was a spitting image of Big Bird. And there were siblings whose parents made a larger-than-life claw machine for their little ones.

Kelly Abrecht dressed up her son, Declan in an Old Bay Seasoning box, complete with a little red cap.

Abrecht entered a photo of her pint-sized seasoning in a costume contest on Route One Apparel’s Facebook page. But Declan's costume wouldn't have been complete without some crustaceans.

His siblings - twins Trevor and Adeline - dressed as crabs and accompanied Old Bay, riding in their dual stroller, which was covered with a crab net.

“Vote for us because we love all things Maryland!!!” the photo’s caption read on the Route One Facebook post.

Abrecht said her little crab boil warmed the hearts of everyone who saw the photo and they won the contest, which included a gift card for Route One Apparel.

But more importantly, they won bragging rights for having won the internet on Halloween.