Yarnell Sampson, the father of Tyre Sampson, the 14-year-old who died in March 2022 after he fell off the Orlando FreeFall ride at ICON Park, spoke with reporters on Monday, June 20. He demanded a public apology from the ride's operators. He also talked about it being his first Father's Day and birthday without his son.

Yarnell Sampson, who has filed a lawsuit against several companies, including the ride's operators and ICON Park in wake of his son's death, also said he wanted a public apology from Slingshot Group, the owner of the ride, and a permanent memorial.

Along with Sunday being Father's Day, Yarnell said it was also his birthday – the first time he spent both without his son.

Yarnell Sampson, the father of Tyre Sampson, the 14-year-old who died in March 2022 after he fell off the Orlando FreeFall ride at ICON Park, spoke with reporters on Monday, June 20. He demanded a public apology from the ride's operators. He also talked about it being his first Father's Day and birthday without his son.

STORY: Florida gas prices are dropping. Here's why, according to AAA

"I came down here to show my respects. This year is the first time I didn't have a birthday party set up for myself, so this is my celebration to be with my son. To respect his wishes, to keep this justice thing going, and to get this thing going toward the right direction as far as change," Yarnell said.

He said the goal is to get 25,000 signatures on a petition to get the 430-foot drop tower attraction taken down permanently, saying that if it reopened, another person could possibly die on the ride he called a "death trap." 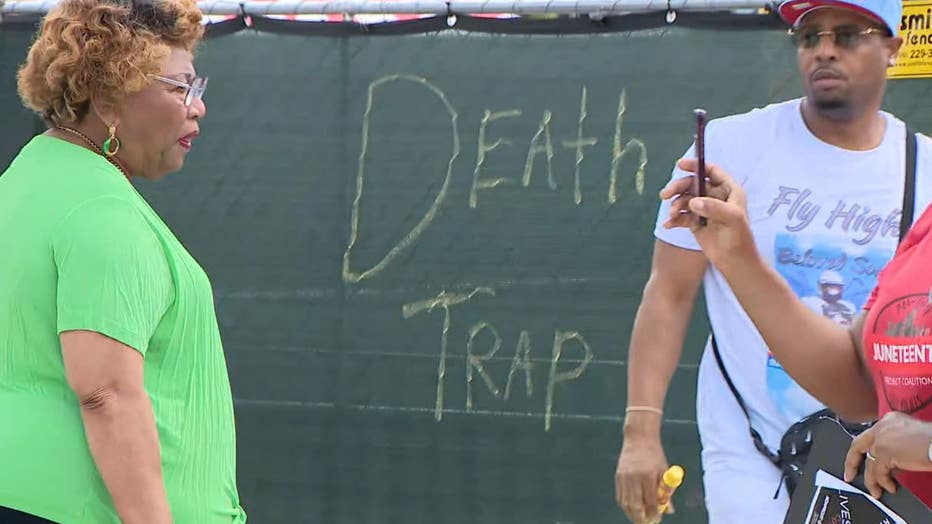 Yarnell Sampson, Tyre Sampson's father, uses chalk to write the words, "death trap" on the fence surrounding the ride where his son fell to his death.

Yarnell also called on the ride's operator to apologize to the family in the teen's death.

"Me and my son's mother deserve a public apology, stating that ‘we made mistakes, we’re sorry, we can change some things, and maybe we can work with you going forward.' – I've gotten none of those things," Yarnell said.  "So I'm looking forward to that public apology."

The news conference Monday was the first time the public has heard from Tyre's family since his autopsy findings were released last week.

The autopsy, which was conducted by the Orange County Medical Examiner, concluded that the boy's cause of death was the result of blunt force trauma and the manner of death was "accident." The report also revealed that Sampson weighed nearly 100 pounds more than the maximum passenger weight for the ride, which was reported and widely speculated after the March fall.

Attorney Ben Crump, who joined Yarnell at the news conference, said the results confirmed everything that they suspected.

"Tyre was too big to have been on the ride. There is no doubt about that," Crump said. "The weight limit was 286 pounds, but they did not follow their own restrictions."

"To Slingshot Group, to ICON Park executives, you all cannot simply sweep this under the rug as if Tyre Sampson's death doesn't matter," Crump added.

In a statement Monday afternoon, a spokesperson for Slingshot Group said: "We support the concepts outlined today in Florida Senator Geraldine Thompson’s ‘Tyre Sampson Bill’. The safety of our patrons always comes first. "

"Our company is not planning to open a new ride at ICON Park, however we do hope to reopen the Slingshot ride, once we have all the necessary approvals from the Department of Agriculture.  Also, we have been coordinating with representatives of Tyre’s family to return items from the memorial area to them, and we will continue to do so in the future."

State Rep. Thompson alleged during the press conference that Slingshot Group has filed a permit to open a new ride, though exact details were not released. Slingshot Group owns two rides at ICON Park – Orlando FreeFall, which has been closed since Sampson's death, and Orlando Slingshot. The company also owns the Orlanfo Starflyer, which is near the park.