The Biden administration has released a federal strategy to build 500,000 charging stations for electric vehicles across the country and ultimately transform the U.S. auto industry.

In an effort to help reduce its carbon footprint and prevent the effects of climate change, UPS has come up with a new way to deliver millions of packages in the world's most congested cities.

The company is currently testing out electric cycles called eQuads in New York City and hopes to expand them to other cities across the country, replacing some of the larger brown trucks we're all used to seeing.

"We do have this eQuad operating in Germany and some European cities like London and Paris," said UPS Vice President of Public Affairs Axel Carrión. "We've very excited about the potential this eQuad can bring right here in New York City and in the U.S." 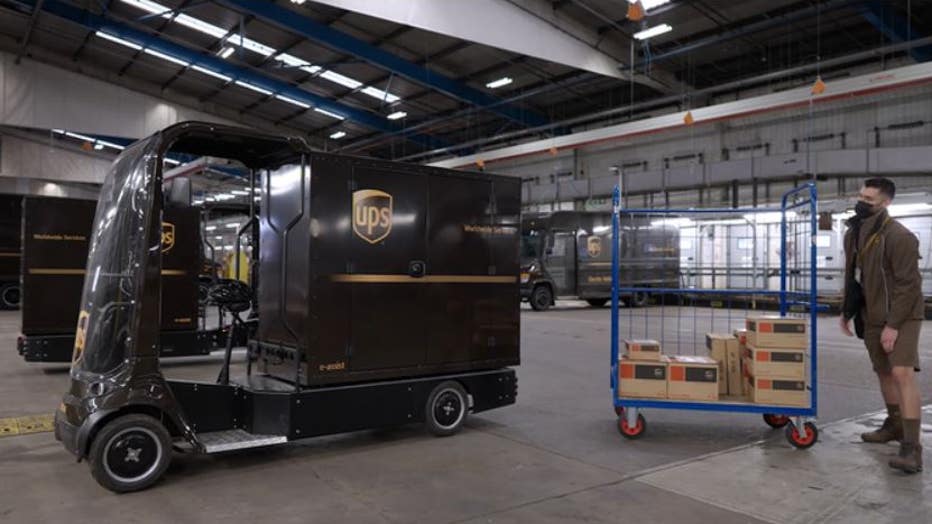 According to UPS, the eQuads use no gas, are carbon-neutral and human-powered.

"They're part of our entire global fleet," Carrión said. "We have over 13,000 alternative fuel and advanced technology vehicles in our fleet. We have over 1,000 electric vehicles and plug-ins in our network."

Carrión said the addition of the eQuads is part of a larger plan for UPS to achieve its goal of carbon neutrality by 2050, as well as achieving 40% alternative fuel in the company's fleet.

The summer months generally have great weather for biking, but fall and winter mean snow-covered streets for parts of the country. UPS officials said the company still plans on using the new eQuads during winter weather.

In an effort to help reduce its carbon footprint and prevent the devastating effects of climate change, UPS has come up with a new way to deliver millions of packages in the world’s most congested cities.

The eQuads are 34 inches wide and can run at speeds up to 15 mph, which would allow for them to be used in bike lanes in major cities, too.

"It's very nimble," Carrión said. "Especially in some of our narrow streets, some of the areas where it would be a little more difficult for our larger vehicles to pass through or find parking. It can carry up to 440 lbs of cargo."

In addition, Carrión said they can travel up to 40 miles per charge before it needs to be juiced up again and return to the streets.

Find more updates on this story on FOXWeather.com.