ZEPHRYHILLS, Fla. - Police in Bartow say they have arrested a 15-year-old who vandalized a school bathroom while participating in a so-called TikTok challenge.

The trend involves students breaking or stealing items, then posting photos and video online with the caption "devious licks." 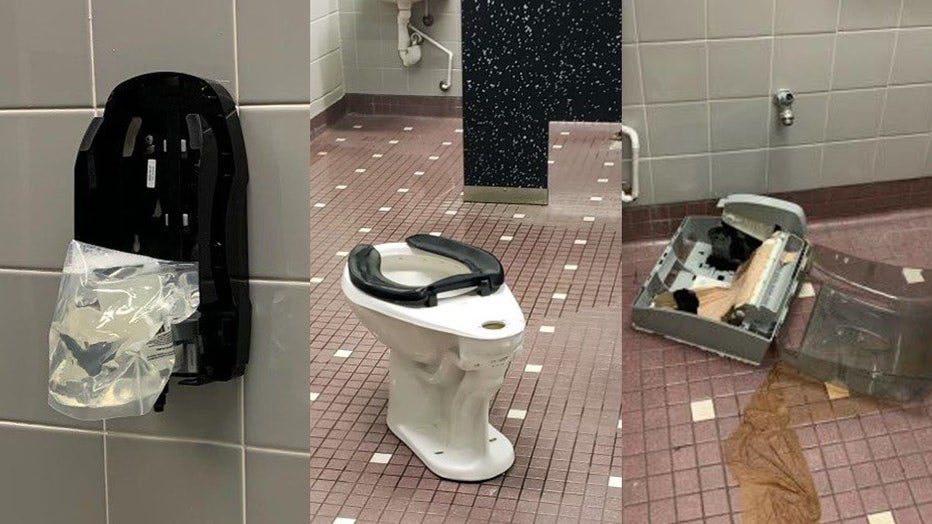 Parent or Guardian,
I assumed a subject line like the above would get parent attention and hope you will read this message in it's entirety and then assist us as partners in education.

We are experiencing bathroom and school destruction that students are performing on Tik Tok and calling it a devious lick or just a "lick". A "lick" on social media involves stealing, breaking or destroying school property. This is a damage trend that is happening in schools- students do not realize the impact of these decisions.

As a principal, I cannot fathom why students would want to destroy their own school (or any place really). This is something that has been happening at many others schools and I am disheartened that RRHS has been targeted several times today.

We will investigate every single video, we will monitor and use social media footage to catch the students responsible and we will ask for law enforcement intervention in every situation while also providing school discipline at the maximum level allowed.
Please talk with your student immediately, as all students involved in the making of the video, destruction of property or watching and cheering on the destruction will be addressed and face consequences. If your student would like to report any activity please ask them to see any teacher, admin or Cpl. Maseda at any time.

I realize that a LARGE MAJORITY of our Royals would never participate in this activity on any level, I am hoping that having conversations with students at home will lead to conversations among peers reminding them that they are engaging in criminal behavior that violates the code of conduct - and the law.

Thank you for partnering with us,
Dr. Zetzsche

The Bartow Police Department said the teen, who is not being identified, is charged with criminal mischief and theft. The suspect told investigators he did the damage to look "cool" and take part in the social media trend.

Police said they have a video of the suspect with the stolen property.

"I do not think it is cool to damage and steal property at your school," Bartow PD interim chief Bryan Dorman said in a statement. "I hope that his arrest sends a strong message to those who are thinking about taking part in the senseless social media craze. While at school, learning is cool; stealing and damaging are not. Hopefully this young man learned a valuable lesson today that committing crime is not cool."

The Tampa Bay Times on Wednesday quoted Zephyrhills High principal Christina Stanley as saying her administration is using camera footage and witness statements to "pursue school and legal consequences if appropriate, as well as financial restitution for vandalized school property."

The newspaper also reported that one school board member told her colleagues Tuesday that the destruction is happening even in the district's middle schools.

Late Wednesday, TikTok issued a statement confirming it has banned content around the "devious licks" trend.

"We expect our community to create responsibly - online and (in real life)," the platform said in a tweet. "We're removing content and redirecting hashtags & search results to our Community Guidelines to discourage such behavior. Please be kind to your schools & teachers."

The principal of J. W. Mitchell High School, Jessica Schultz, sent the following message to parents this week in regards to the destructive TikTok challenge:

"Parents, I am asking that you have a conversation with your child about vandalizing and stealing Pasco School Board Property. We have had student destroying bathrooms by pouring red Kool-aid in the toilets, ripping soap machines off of the walls, and trashing the bathrooms. Doing this is a crime and those who are found committing such acts will be disciplined and arrested.

We want to remind you that you need to respect each other and just be nice. Calling each other names, posting negative things online, and acting inappropriately towards each other is uncalled for and unnecessary. Again, just be nice. And if you can’t find something nice to say, then don’t say anything at all.

I am also asking that you have a conversation with your child about the dangers of posting inappropriate pictures online, especially when they are sent via cell phone text or chat messages and when they are of another individual. Doing this is a crime. Unfortunately, this is something that we have had to address this year on multiple occasions and we need your help."