Doctors urge parents to keep up with vaccinations

TAMPA, Fla. - Vaccines are essential for protecting against debilitating and sometimes deadly diseases like measles, rubella, whooping cough and the flu, but during stay-at-home orders for COVID-19, the number of regular, childhood vaccinations administered by pediatricians dropped significantly in Florida and nationwide.

The drop began in March. By April, the Florida Department of Health said the childhood vaccination rate dove by 40% compared to last year.

“The week after spring break, the numbers just fell off a cliff,” said Dr. Toni Richards-Rowley of Kids First Pediatric Care in Lithia.

According to a May study from the Centers for Disease Control, it’s a pattern nationwide.

“The Measles and Rubella Initiative recently they came out with a statement saying we could potentially have 117 million children across the world with missing vaccines like measles, which is dangerous and concerning,” said Sharma. 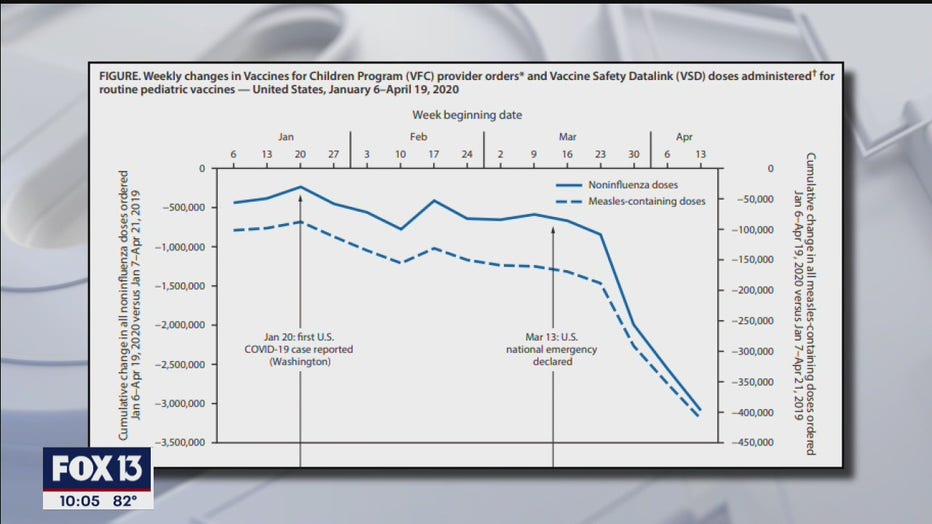 “Florida before COVID-19 hit had some of the lowest numbers of vaccination rates. Add to that now a delay in vaccinations in kids who need their vaccines, and we are at an increased risk of having an outbreak of measles, or an outbreak of whooping cough,” said Richards-Rowley.

Richards-Rowley said her office is taking steps to ease concerns parents may have about office visits, including the use of masks and increased sanitation.

“Some pediatricians have been doing well visits via telehealth and then just bring them into the office only for the vaccines. Some pediatricians have been changing their office hours. So in the mornings, they only see well visits. In the afternoon, they have the sick visits to separate those people from each other,” said Richards-Rowley, adding that her office is doing both methods.

Doctors said catching up on vaccinations will help reverse the trend.

“With the ongoing COVID-19 pandemic, this is a reminder of how important vaccinations are and to say simply that they prevent diseases and they can save lives,” said Sharma.

Since the pandemic caused some parents to postpone or outright cancel their child’s vaccinations, pediatricians are urging you to call if you have any concerns about bringing your child in for shots.