CLEARWATER BEACH, Fla. - As other counties in Florida announced beach closures for the Fourth of July weekend, Pinellas County leaders reiterated they are not going to shut down the beaches for the holiday weekend.

Instead, they are calling for the public to be responsible and make sure they maintain the social-distancing guidelines during a weekend that is expected to attract many to the sandy shores of the county.

During Tuesday's meeting with the Pinellas County commissioners, some pushed for law enforcement officers to patrol the sand or have a strong presence. Commissioner Kenneth Welch, for instance, said he is worried about test rates in the next few weeks.

"We know that behavior changes when you see the highway patrol car on I-275. I think the presence makes a difference," Welch said.

Sheriff Bob Gualtieri said the "Herculean effort" to use 300 officers when beaches reopened is not a sustainable method to do again.

He pointed out that the mass gathering problem does not fall on those who are enjoying the beach, it's the indoor spaces.

Florida does extensive contact tracing to figure out where people who tested positive have been before they got sick. And the state’s health experts are finding a clear pattern -- it’s not leading back to the outdoor protests; it’s leading to indoor places where young adults go to hang out and party.

Last week, Governor Ron DeSantis suspended alcohol consumption at bars across the state. However, businesses licensed as restaurants can operate and serve alcohol.

Sheriff Gualtieri said there are businesses that are following the rules, but he said his deputies are targeting where mass gatherings can occur.

"The places that are truly bars that are defiant," he said. "We'll continue to enforce that. I think the focus needs to be on there." 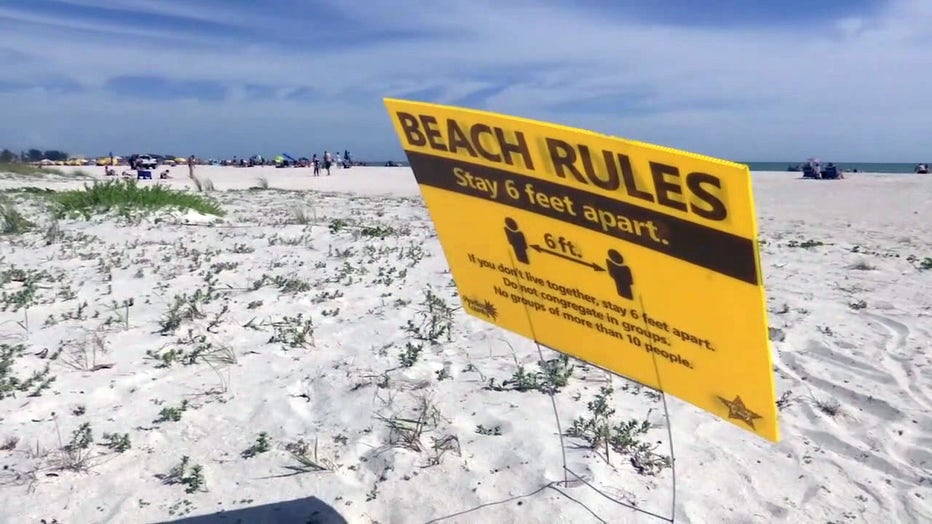 The sheriff said he advised his deputies to give a warning to businesses. The second offense could lead a criminal notice to appear in court. If there is a third strike, a physical arrest could occur.

For example, he said, for hotel guests who refuse to wear a mask in the lobby, he suggests the hotel should just not check those guests into their rooms.

"Let's put all this responsibility on the community. They are the ones allowing this problem," the sheriff said.

Dr. Ulyee Choe, the director of the Department of Health in Pinellas County, said there are 308 COVID-19 patients in hospital beds and 75 in the ICU. Whereas a few weeks ago there were about 40 patients hospitalized for the coronavirus.

The Pinellas County commission meeting can be viewed here: