Determining the future of the Pinellas Trail

LARGO, Fla. - From an old railway line to a 15-foot-wide trail connecting St. Petersburg to Tarpon Springs, the Pinellas Trail opened in 1990 and now stretches 60 miles. Today, it is considered one of the best biking paths in the state of Florida.

The first five-mile section opened to the public 30 years ago and work is constantly being done to extend and improve the linear park.

Officials hosted a virtual meeting Tuesday night to hear from the public about the Pinellas Trail and where it’s headed, including the completion of the 75-mile Pinellas Trail loop. 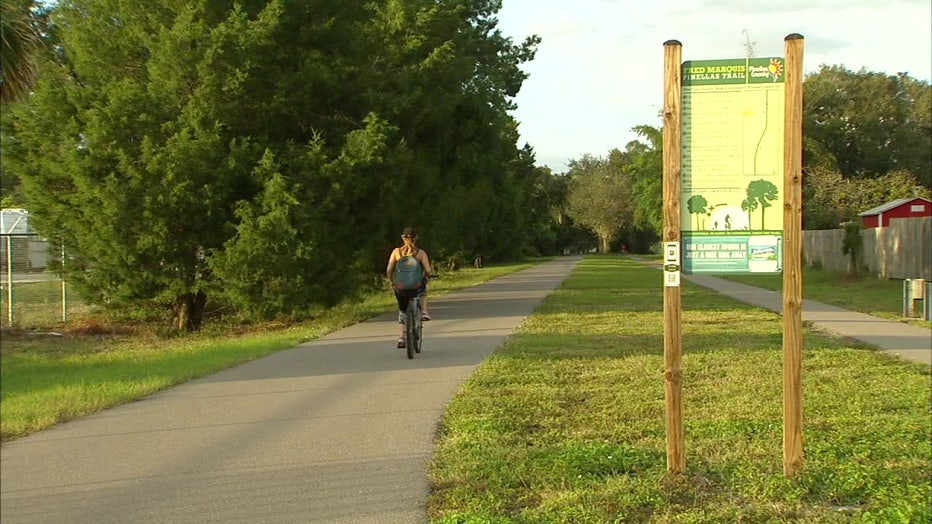 There are only two remaining gaps in that loop. The one to the north extends 6.8 miles and is currently under construction, set to be complete in the fall of 2022.

"The next piece to be constructed is a 4-mile yellow segment from Heinz Bayshore to 127th Avenue. Construction on that one will start in 2024, and after that, we have about four more miles to finish, and the loop will be done all the way around the county," said Joan Rice, with Pinellas County Public Works Multimodal Transportation.

The loop will also connect to local and regional trail networks, making it easier for more people to access and use it for walking, jogging, skating and biking. But the county knows the trail is already very popular.

"We have a trail counter program that uses infrared cameras located throughout the panels travel network that does a very good job of accurately recording the comings and goings of people using the trail," Blanton said.

Usage skyrocketed in 2020, with trail totals topping 2 million and that pace has continued through this year.

The county recently completed a trail visioning document to help shape its future and make improvements.

Officials are updating signage, improving traffic flow, and next month will launch an eight-week ‘Trail Courtesy Campaign,’ encouraging all users to respect the space and each other.