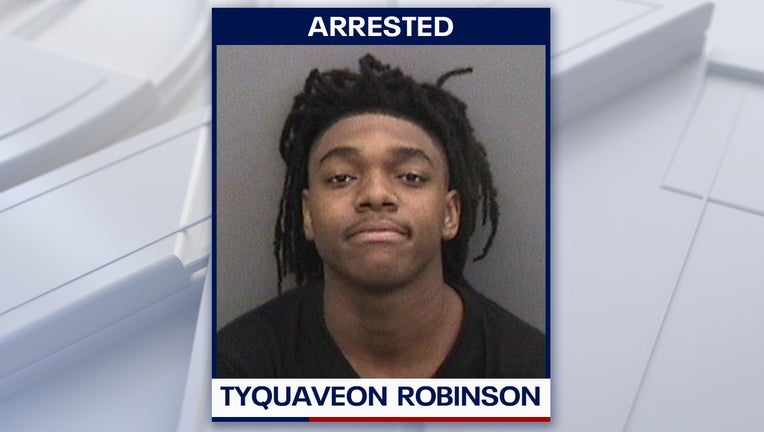 HAINES CITY, Fla. - Police have arrested a 19-year-old man for murder in a fatal shooting that happened in Haines City on May 23.

Tampa police say they assisted Haines City police in the arrest of Tyquaveon Robinson, who was wanted for the murder of 19-year-old Dyreon Outsey.

The shooting happened around 12:40 p.m. in the area of Dr. Martin Luther King Jr. Way, when investigators said Robinson and 28-year-old Branden Johnson were following Outsey's silver Toyota 4Runner in a red Alfa Romeo before firing into the vehicle.

Outsey was taken to Lakeland Regional Health Medical Center where he died from his injuries.

The victim was the older brother of one of the suspects arrested in last week's drive-by shooting in Winter Haven. That shooting happened May 26, just three days after Outsey's murder. Polk Sheriff Grady Judd said the victim's brother, 17-year-old Zedarian Outsey, was out for revenge.

Robinson is charged with first-degree murder, felony possession of a firearm by a convicted felon, shooting into an occupied vehicle and tampering with physical evidence.

Johnson, meanwhile, was arrested Sunday, May 30 in Miami Beach after he was involved in a traffic crash.

Investigators say at the time of his arrest, Miami Beach officers located two guns inside his rental vehicle.

Johnson is charged with possession of a firearm by a felon by Miami Beach police, while Haines City police is charging him with accessory after the fact to first-degree murder and shooting into an occupied vehicle.

Both Robinson and Johnson will be extradited to the Polk County Jail.