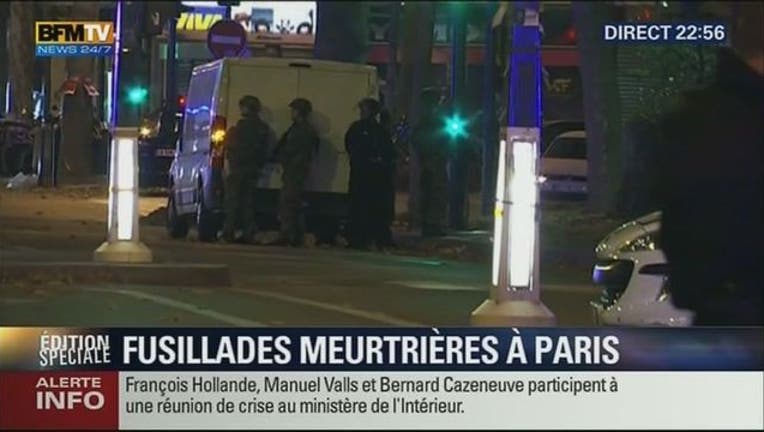 PARIS (AP) — Two police officials said at least 26 people have been killed in shootings and explosions around Paris Friday, in the deadliest violence in France in decades.

A police official said 11 people were killed in a Paris restaurant in the 10th arrondissement, and about 15 killed in the Bataclan theater, where a hostage-taking is under way.

Both officials spoke on condition of anonymity because they were not authorized to be publicly named according to police policy.

Also late Friday, two explosions were heard outside the Stade de France stadium north of Paris during a France-Germany friendly football match. It is unclear if the explosions were linked to the other events.

A police official confirmed one explosion in a bar near the stadium. It is unclear whether there are casualties.

An Associated Press reporter in the stadium Friday night heard two explosions loud enough to penetrate the sounds of cheering fans. Sirens were immediately heard, and a helicopter was circling overhead.

The officials spoke on condition of anonymity because they were not authorized to be publicly named.

The attack comes as France has heightened security measures ahead of a major global climate conference that starts in two weeks, out of fear of violent protests and potential terrorist attacks.

Emilioi Macchio, from Ravenna, Italy, was at the Carillon bar near the restaurant that was targeted, having a beer on the sidewalk when the shooting started. He said he didn't see any gunmen or victims, but hid behind a corner then ran away.

France has been on edge since deadly attacks by Islamic extremists in January on satirical newspaper Charlie Hebdo and a kosher grocery that left 20 dead, including the three attackers.

The restaurant targeted Friday, Le Carillon, is in the same general neighborhood as the Charlie Hebdo offices.

The country has seen several smaller-scale attacks or attempts since, including an incident on a high-speed train in August in which American travelers thwarted a heavily armed Islamic radical trying to attack passengers.