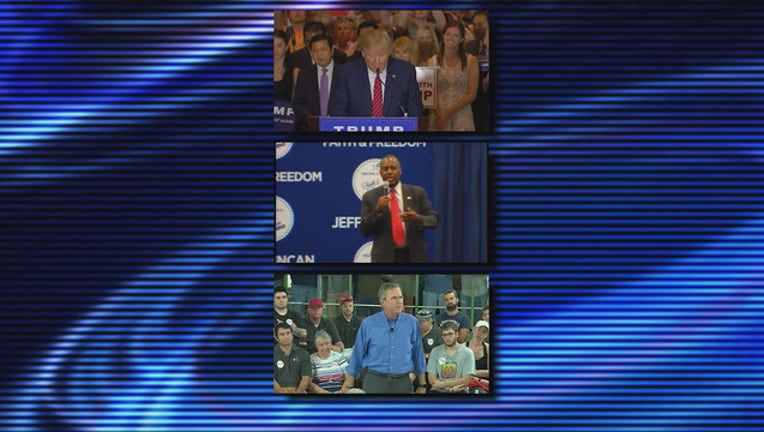 TAMPA (FOX 13) - While Donald Trump continues to lead his Republican rivals in Florida, former Florida Governor Jeb Bush has slipped into third place in his own home state. Retired neurosurgeon, and Florida resident, Ben Carson has suddenly surged into a strong second place.

"Trump's strongest support by far comes from the youngest of voters, age 18 to 29. But he also seems to be strong with those aged 45 to 64, a potent segment of Florida GOP primary voters," said Insider Advantage Founder Matt Towery. "Carson has a big lead among the 30 to 44 age group. That's a segment who tend to be most active with schools and community issues related to their children. Bush remains consistent among all age groups but has lost his earlier steam, at least for the moment."

A survey of 498 likely Florida Republican presidential primary voters was conducted September 2, 2015. The poll is weighted for age, race, and gender and has a margin of error of plus or minus 4.3% with a confidence level of 95%.

ON THE DEMOCRATIC SIDE

"Florida has long been considered a stronghold for the Clintons and at the moment that remains the case," observed Towery. "Hillary Clinton held a commanding lead against her rivals or potential rivals in every age group except for the youngest of voters. Respondents age 18 to 29 said they favored Sanders at nearly a 50 percent level. Clinton lead among African-Americans, Hispanic-Latinos, and white voters-all at over 50 percent. Unlike many states, there was no real gender gap for Clinton, who was favored by a majority of men and women."

The telephone and mobile device survey was conducted September 2, 2015. The poll is weighted for age, race, and gender and has a margin of error of plus or minus 4.7% with a confidence level of 95%.