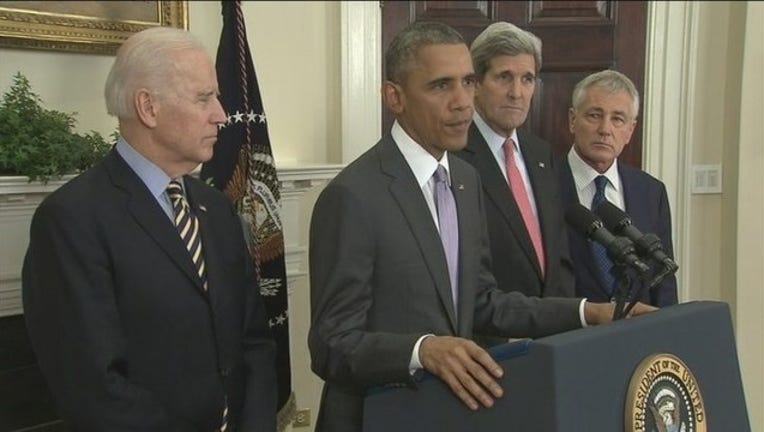 President Obama on Wednesday opened the door to "limited" ground combat operations against the Islamic State, as he asked Congress to formally authorize military force against the terrorist network.

The president, in a proposed resolution and a letter to Congress, underscored the "grave threat" posed by ISIS.

"If left unchecked, ISIL will pose a threat beyond the Middle East, including to the United States homeland," Obama said.

But the request includes no restrictions on where U.S. forces could pursue the threat. And while the current military campaign centers on coalition airstrikes in Iraq and Syria, the proposal clearly allows U.S. ground troops to engage in limited circumstances.

"The authorization I propose would provide the flexibility to conduct ground combat operations in other, more limited circumstances, such as rescue operations involving U.S. or coalition personnel or the use of special operations forces to take military action against ISIL leadership," Obama wrote in his letter to Congress. "It would also authorize the use of U.S. forces in situations where ground combat operations are not expected or intended, such as intelligence collection and sharing, missions to enable kinetic strikes, or the provision of operational planning and other forms of advice and assistance to partner forces."

The request kicks off what is likely to be a drawn-out debate in Congress, with hawkish lawmakers sure to push for a broader authorization and anti-interventionist voices seeking more limits.

Already, Sen. Tim Kaine, D-Va., said he is "concerned about the breadth and vagueness of the U.S. ground troop language and will seek to clarify it."

Tennessee Sen. Bob Corker, the chairman of the Senate Foreign Relations Committee, said he appreciated the president seeking the authorization and would quickly begin holding "rigorous hearings" on the White House request.

"Voting to authorize the use of military force is one of the most important actions Congress can take, and while there will be differences, it is my hope that we will fulfill our constitutional responsibility, and in a bipartisan way, pass an authorization that allows us to confront this serious threat," Corker said.

The White House insists it already has the authority to launch airstrikes against ISIS militants in Iraq and Syria, as the U.S. has been doing for months, but wants Congress to sign off in order to demonstrate American unity.

In a letter to lawmakers accompanying the request, Obama urged them to "show the world we are united in our resolve to counter the threat."

The proposed resolution listed ISIS atrocities in the region, including executions of American hostages and the "abduction, enslavement, torture, rape and forced marriage" of women and girls in the region.

"It threatens American personnel and facilities located in the region and is responsible for the deaths of U.S. citizens James Foley, Steven Sotloff, Abdul-Rahman Peter Kassig, and Kayla Mueller," Obama said in his letter, listing the American hostages who died in ISIS custody.

Obama plans to speak on his request from the White House Wednesday afternoon, at 3:30 p.m. ET.

Obama's proposal launches an ideological debate over what authorities and limitations the commander in chief should have in pursuit of the extremists, with the shadow of lost American lives hanging over its fate. Confirmation of the death of 26-year-old humanitarian worker Mueller on the eve of Obama's proposal added new urgency, while the costly long-running wars in Iraq and Afghanistan were a caution to some lawmakers against yet another protracted military campaign.

Obama is offering to limit authorization to three years, extending to the next president the powers and the debate over renewal for what he envisions as a long-range battle. He is proposing no geographic limitations where U.S. forces could pursue the elusive militants. The authorization covers the Islamic State and "associated persons or forces," defined as those fighting on behalf of or alongside IS "or any closely-related successor entity in hostilities against the United States or its coalition partners."

The proposal bars "enduring offensive ground combat operations," an ambiguous term intended as compromise between lawmakers who want authority for ground troops and those who don't.

Obama's resolution would repeal a 2002 authorization for force in Iraq, but maintain a 2001 authorization against Al Qaeda in Afghanistan, although Obama said in his letter to lawmakers his goal is to refine and ultimately repeal that authorization as well.

Obama argues the congressional authorizations President George W. Bush used to justify military action after 9/11 are sufficient for him to deploy more than 2,700 U.S. troops to train and assist Iraqi security forces and conduct ongoing airstrikes against targets in Iraq and Syria. Critics have said Obama is overstepping outdated authorities to target the new threat from militants imposing a violent form of Shariah law in pursuit of the establishment of an Islamic state.

--Material from the Associated Press was used in this report.