Jacob Chansley, an Arizona man known as the "QAnon shaman" who was photographed inside the Senate dais during the Capitol riot, reached a plea deal Friday and will likely serve 3 1/2 to 4 1/2 years in prison. Chansley was one of the first people to enter the Capitol building on Jan. 6, shirtless, with an American flag spear, face paint and furry horns. He was arrested three days after the riot and originally charged with six crimes. On Friday he pleaded guilty to one felony count of obstructing an official proceeding. LiveNOW's Daytona Everett speaks with Fox 10 Phoenix's Matt Galka on the latest.

Prosecutors want Jacob Chansley to spend 51 months behind bars, which would so far be the stiffest penalty handed down to those convicted in the Jan. 6 capitol riot.

Chansley, who goes by the moniker "QAnon Shaman," is one of the hundreds of people arrested for their alleged involvement in the incident. Authorities said photos and videos showed him charging through the Capitol wearing a furry hat with horns, facepaint and no shirt.

In September, he pleaded guilty to obstruction of Congress, who were certifying the 2020 election results. He is expected to be sentenced on Nov. 17, and prosecutors said in a memo that he should face no less than 51 months in prison.

"The United States respectfully recommends that the Court impose a sentence of 51 months’ imprisonment followed by three years’ supervised release, and $2,000 restitution," the memo reads.

According to FOX 10, Chansley previously acknowledged in a court record to being one of the first 30 pro-Trump rioters to stream into the Capitol building. He riled up the crowd with a bullhorn as officers tried to control them, posed for photos, profanely referred to then-Vice President Mike Pence as a traitor while in the Senate. He wrote a note to Pence saying, "It’s only a matter of time, justice is coming." He also made a social media post last November in which he promoted hangings for traitors. 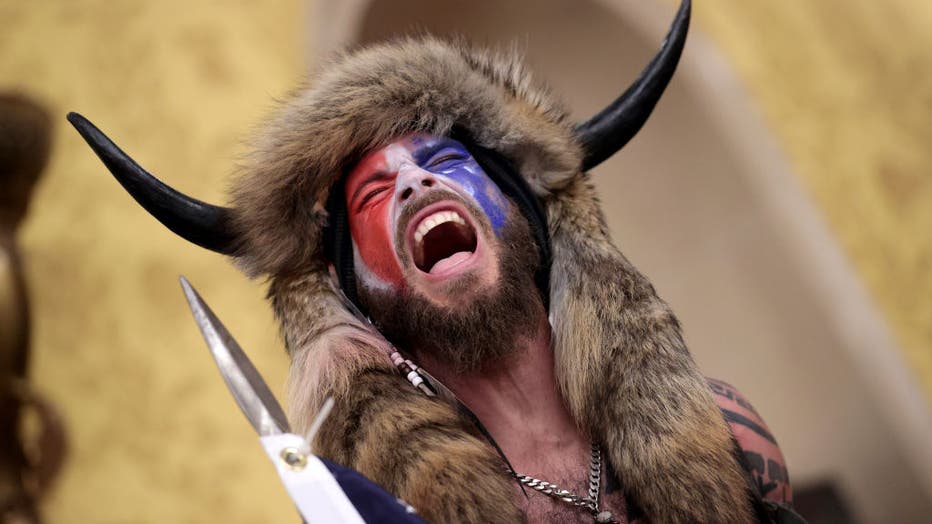 A protester screams "Freedom" inside the Senate chamber after the U.S. Capitol was breached by a mob during a joint session of Congress on Jan. 06, 2021, in Washington, DC. (Photo by Win McNamee/Getty Images)

The image of Chansley with his face painted like the American flag, wearing a bear skin headdress and looking as if he were howling was one of the first striking images to emerge from the riot.

RELATED: Tampa man among first to plead guilty for involvement in Capitol riot