In an already unpredictable year, an Italian farmer discovered another strange occurrence this month, according to multiple reports.

Cristian Mallocci, who runs a farm on the Mediterranean island of Sardinia, was shocked when one of his eight dogs gave birth to a green-furred puppy.

Within seconds, he named the tiny pooch Pistachio, according to Reuters.

The canine was part of a five-dog litter born Oct. 9. Just like their mixed-breed mom, Spelacchia, they all had white fur -- except Pistachio.

It's very uncommon for a dog to be born with green fur. The phenomenon is believed to occur when pale-colored puppies make contact with a green pigment called biliverdin while in the womb, according to the news organization.

Last October, a Great Dane in Colorado gave birth to a litter of pups, one of which had green fur similar to the recently born Italian pup.

“It was so shocking when she was born," the Great Dane's owner, Caddy Williams, told Colorado Springs's KRDO-TV. "Luckily, I had recently read an article about a green dog. So at least I knew what was going on."

The effect, however, is also temporary. Mallocci said Pistachio’s bright green color has faded each day since it was born. 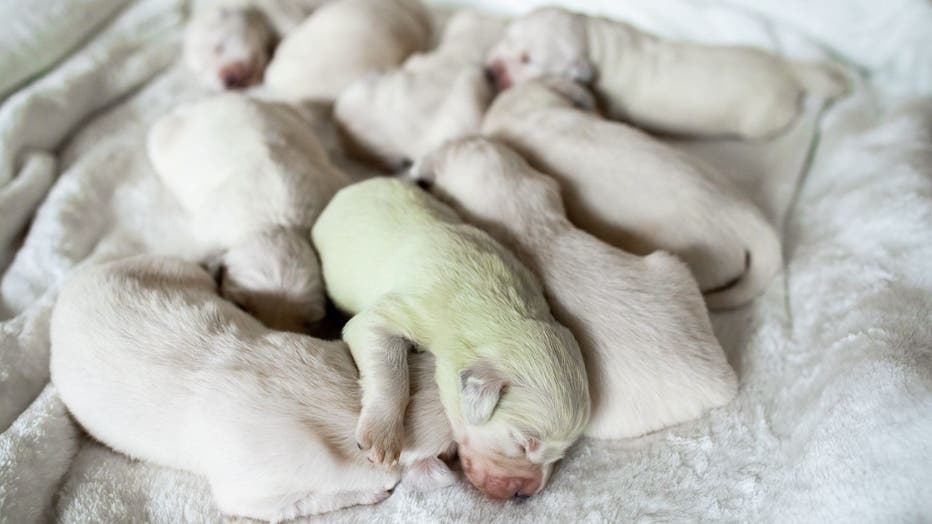 A mint green golden retriever puppy named "Mojito" is seen with other puppies in a previous instance of a puppy being born with green fur, Oct. 22, 2019. (Getty Images)

The owner added that unlike the other puppies -- who will be given away to new homes -- Pistachio will be trained on the farm to look after sheep with Spelacchia, Reuters reported.

He added that green was a color of hope and luck, something more people could use during an already challenging year amid the coronavirus pandemic.