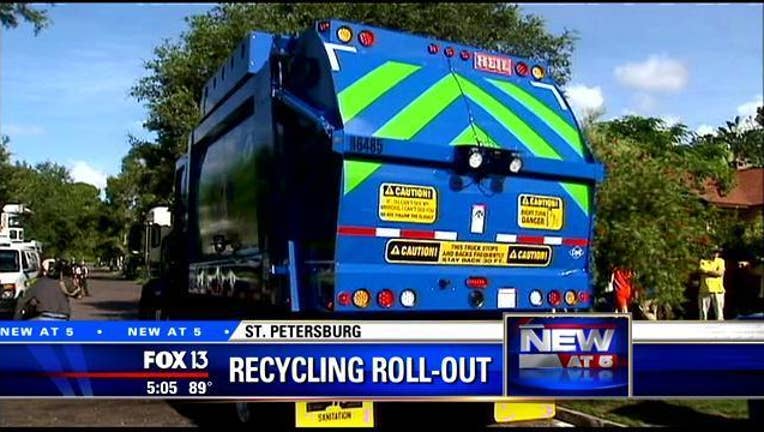 Patting a 95 gallon blue bin, Mayor Rick Kriseman proclaimed, "We certainly think this is the easiest way of getting rid of your recyclables."

A short while later, the president of the Old Northeast Neighborhood Association patted another 95 gallon bin and told reporters, "There are many people for whom getting this to the front of their property is just not easy."

The element of "curbside" is the rub in traditional neighborhoods such as the Old Northeast and Historic Kenwood. The older neighborhoods have narrow lots and streets, most with tight parking issues. Yet there are alleys, which city garbage trucks traverse to pick up regular refuse. "What we're saying is the alleys have been here for 100 years, figure it out," Motzenbecker said. "That's the way this neighborhood was built."

Some residents who gathered around Motzenbecker's news conference told FOX 13 News they will not be curbside recyclers. Bob Birkenstock said his home does not have a path from his back yard to his front yard. "We cannot get our bins through our property to the front of the street," he explained.

Many of the homes near Art Silvergleid have elevated front yards. "I don't have any access on either side," Silvergleid said. "There's no way I can get it out my front door and down five steps without killing either myself or ruining the steps, so I'm basically not going to do it."

The mayor and his public works director repeated their intentions to eventually make adjustments to St. Petersburg's curbside recycling program. "I suspect and hope that even the handful of residents who want their recycle containers picked up in the alley will eventually come around," Kriseman told reporters.

Motzenbecker said his neighborhood wants a more affirmative admission of missteps in launching the program, as well as more definitive assurances shortcomings will be fixed. "What we object to is the idea that it is going to be on an "exception basis" that they're going to deal with the traditional neighborhoods, when the exception are the people who can actually get it to the front," Motzenbecker said.