TAMPA, Fla. - The United States is facing growing tensions with Russia over its efforts to influence the 2020 election and its increased military maneuvers near Alaska, but while the director of the U.S. Defense Intelligence Agency describes the Russian military as an "existential threat to the United States," the Russian government has a very different view. And the Kremlin is using America’s public airwaves to deliver its perspective directly to the American people, thanks, in part, to a Florida businessman's involvement.

The Russian government is broadcasting its state-run programming known as ‘Radio Sputnik’ on radio stations in Kansas City and Washington and has previously expressed interest in expanding into other major markets across the nation.

Radio listeners may think they’re tuning into typical American news programs or talk shows unless they hear the hourly disclaimer, and even then some may not fully understand it. The disclaimer states:

"This radio programming is distributed by RM Broadcasting LLC on behalf of the federal state unitary enterprise Rossiya Segodnya International Information Agency. Additional information is on file with the Department of Justice." 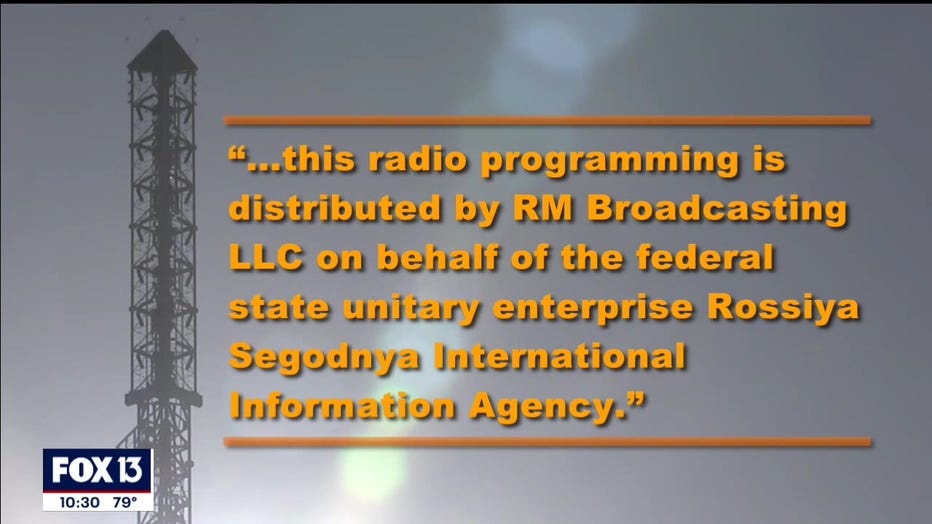 It means they’re listening to Russia’s state-run news agency on airwaves owned by the American people.

Some members of Congress are concerned about that, including California Congresswoman Anna Eshoo, who wrote "the Russian government may be using our country’s own airwaves to undermine our democracy," in a letter to the Federal Communications Commission.

Russia is getting the airtime through RM Broadcasting, which is run by a Florida businessman named Arnold Ferolito. He registered as a foreign agent because the U.S. government required him to in order to sell airtime to Russia.

Ferolito said he registered under protest and disputes being referred to as a foreign agent, despite signing the federal records that designate him as such.

"I’m not an agent irrespective of what I signed," he said. "I would sell to whoever has the right to speak. And if you don’t want to listen to it, don’t listen to it!"

"I would sell to whoever has the right to speak. And if you don’t want to listen to it, don’t listen to it."

From his perspective, Ferolito said he’s just buying airtime he said he should be free to sell to anyone in a country that protects free speech.

That raises the issue of where or if to draw a line in selling airtime to other nations or hostile interests. When asked if he would sell airtime to North Korea, Ferolito said he didn’t know, and he dismissed the question of selling airtime to ISIS as a hypothetical question.

He does like Russian state media, so he gladly sells radio airtime to Russia.

"There’s no news in this country," he complained. "If I want to hear ‘news’ news I’ll tune into RT [Russian state-run TV]…or how about Euro news or how about the BBC?" 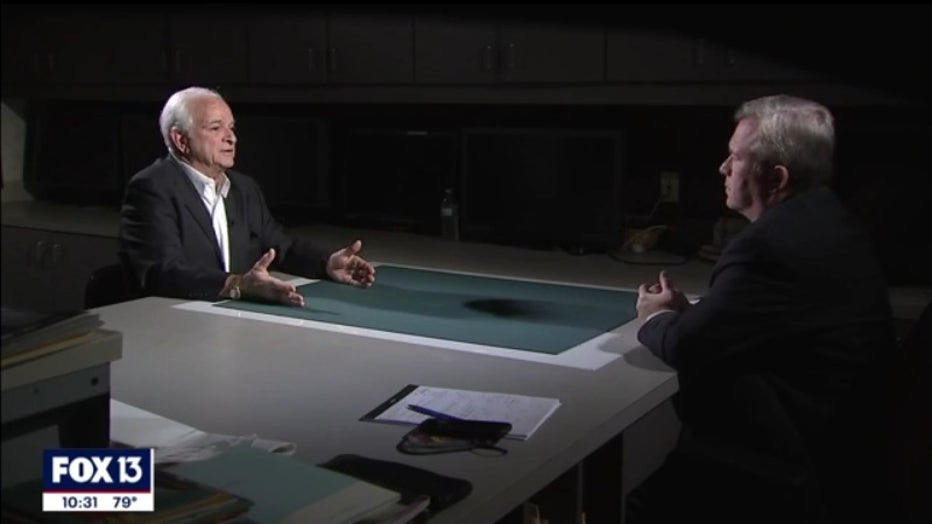 "Conspiracy theories, they’ve been around for years," Arnold Ferolito says. "People believe there are people living on the moon. Maybe there are we don’t know. We haven’t proved it."

That raises a second issue of who should be required to register as foreign agents. BBC, sponsored by the British government, also airs programs on U.S. airwaves. FOX 13 News could find no record of BBC distributors registering as foreign agents.

Also, the Chinese government has had financial interests in U.S. broadcasts, without having to register the distributors as foreign agents.

"What’s the difference?" he asked. "This is a joke and the joke is selective prosecution."

"There’s no news in this country. If I want to hear ‘news’ news, I’ll tune into RT [Russian state-run TV]."

By the U.S. government requiring Ferolito and his company, RM Broadcasting, to register, the public is allowed to know that Russia has paid millions for the airtime. The most recent disclosure shows Russia paid more than $425,000 from July-December of 2020, which raises a third issue.

What return does Russia get on its investment?

The broadcasts have combined sharp attacks on U.S. policy with conspiracy theories -- including claims chemical weapons attacks in Syria were a hoax -- and fact-based news reports. For listeners, it can be confusing.

He says he just sells the time -- and it appears to be paying off for Russia. He said Russia renewed the agreements for another three years.