TAMPA, Fla. - A Tampa man set out on a grueling 48-hour mission to honor the memory of fallen members of the military.

His goal: run four miles every four hours, in honor of 48 lives lost. None of it was easy, fun, or pretty. And that was the whole point.

He picked up the flag, and despite any pain, exhaustion or hunger he was feeling, began mile 41.

The U.S. Navy Petty Officer First Class, who's stationed at MacDill Air Force Base, began his run Monday at midnight, each of the 48 miles ahead dedicated to a service member killed in the War on Terror.

"Their friends and family members think about it every day. They're never going to stop thinking about it," Kopytowski said.

This Memorial Day, he wanted to do something meaningful to commemorate the true meaning of the day. Inspired by the Virginia Run for the Fallen and retired Navy SEAL David Goggins' 4x4x48 Challenge, he mapped out Miles for Military Heroes.

During different legs, he was joined by fellow runners and service members along Ben T. Davis Beach, in Safety Harbor, in his Carrollwood at night, and on Upper Tampa Bay Trail. 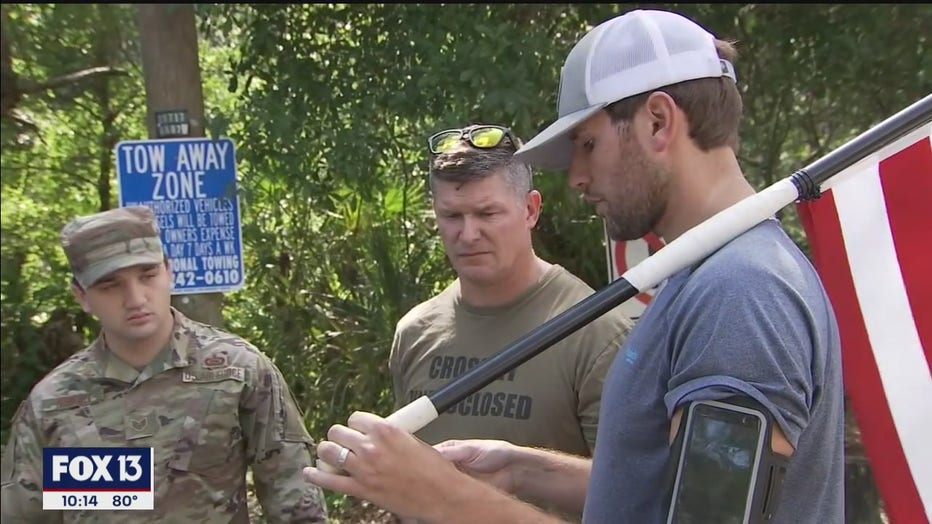 "I had to walk a little in the last two runs," Kopytowsi said Tuesday afternoon. "Just got to the point where I couldn't run anymore. It's okay. It's not about that. It's about the people that we are running or walking for."

As the miles get higher, fatigue and sickness get stronger. "I'm really dehydrated," he said after finishing mile 44. "I threw up a little at the end there."

But this run was never meant to be easy. There's no glory at the finish. It's a 48-mile reminder of those who never got to finish.

"Those people gave their lives for, not just the men and women to the left and right of them, but, for the people back home. They gave up their dreams, their lives, their family so we can have ours," Kopytowski said.

While  Kopytowski was able to complete 44 of the 48 miles, he, unfortunately, had to be admitted to the hospital Tuesday night for fluids and medication. But, just as courageously as he started, he plans to finish the last 4 miles Wednesday.

He hopes to grow this into an annual event, involving families of those he runs for. You can follow his progress and get involved in the next run on his Facebook page, Miles for Military Heroes.