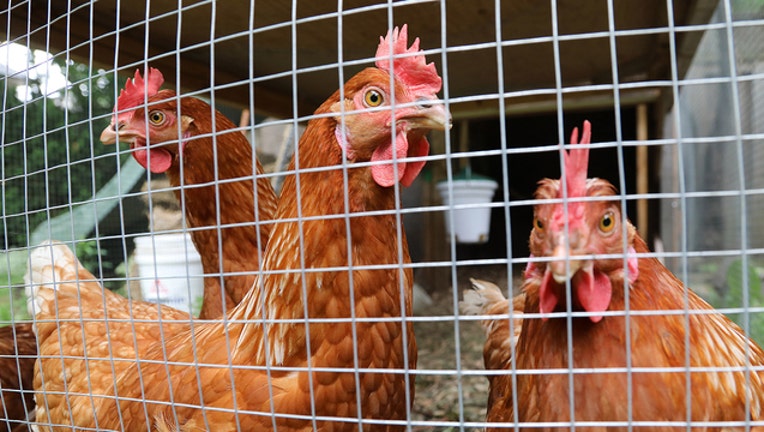 TORONTO, ON - Joe Mihevic keeps chickens. He is also a city councillor of Ward 21 (St. Paul's), one of 4 wards where backyard hens have been approved in the city's Backyard Hen Project. May 28, 2018 (Rene Johnston/Toronto Star via Getty Images)

(FOX NEWS) - More than 1,000 people have been sickened by a salmonella outbreak linked to backyard poultry, the Centers for Disease Control and Prevention (CDC) said in an update late last week.

The CDC on Friday announced a total of 1,003 people have been sickened by the outbreak across 49 states — an increase of 235 people since the federal health agency last issued an update in July. At least two people have died and 175 have been hospitalized due to the illness.

As of Friday, 73 people in Ohio were sickened — the most of any state where cases have been reported. Tennessee followed closely behind with 67 cases.

"Of 850 ill people with age information available, 192 are children younger than 5 years," the CDC said, adding "epidemiologic and laboratory evidence indicate that contact with backyard poultry, such as chicks and ducklings, from multiple hatcheries, are the likely source of these outbreaks."

Many people reported buying chicks and ducklings from agricultural stores, websites, and hatcheries prior to becoming ill.

Symptoms of salmonella usually develop 12 to 72 hours after being exposed to the bacteria, with most people developing diarrhea, fever, and stomach cramps. The illness usually lasts four to seven days and most people recover without treatment.

"In some people, the illness may be so severe that the patient needs to be hospitalized," according to the CDC. "Salmonella infection may spread from the intestines to the bloodstream and then to other places in the body."

Federal health officials say that children younger than 5 years of age, pregnant women, adults 65 and older, and people with weakened immune systems are more likely to have a severe illness.

The CDC estimates salmonella causes about 1.2 million illnesses, 23,000 hospitalizations, and 450 deaths in the U.S. every year.

Food is the source for about 1 million of those illnesses.

In May, when 52 people were affected by the outbreak, the CDC warned to not "kiss or snuggle" chickens. It also issued a list of precautions the public should take when handling the animals to avoid contracting the illness, such as always washing your hands after handling a backyard flock and not letting the birds inside the home — especially in areas where food is prepared.

The CDC also said at the time that children younger than 5 or adults over 65 should avoid handling "chicks, ducklings, or other poultry" altogether.