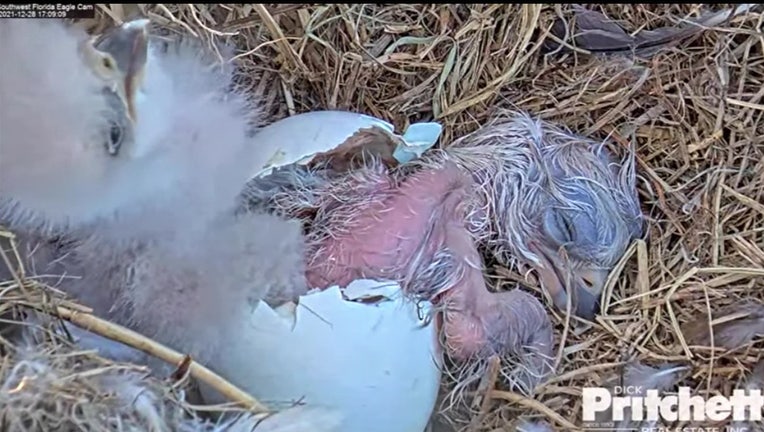 NORTH FORT MYERS, Fla. - One day after an eaglet hatched at a well-known nest in southwest Florida, a pip was spotted on the second egg, belonging to parents, Harriet and M-15. Hours later, the egg hatched, making the bald eagles the proud parents of two new tiny eaglets.

The bald eagle family can be seen from Dick Pritchett Real Estate Family Farm's live camera in North Fort Myers, Florida. The parents have spent more than a month patiently taking turns guarding and incubating the eggs. On Monday, E-19 became the 19th eaglet to hatch successfully at the nest.

One of two bald eaglets hatched Monday and papa bird stopped by to see his new offspring.

On Tuesday morning, a pip was spotted on the second egg. That's the term for a small crack that signals hatching isn't too far away. It generally takes between 12 and 72 hours for a chick to emerge from its egg.

You can check out the live camera here.

According to Florida Fish and Wildlife Conservation, the Sunshine State has one of the "densest concentrations of nesting bald eagles in the lower 48 states, with an estimated 1,500 nesting pairs." In 2007, the U.S. Fish and Wildlife Service removed the bald eagle from its list of federally endangered and threatened species. 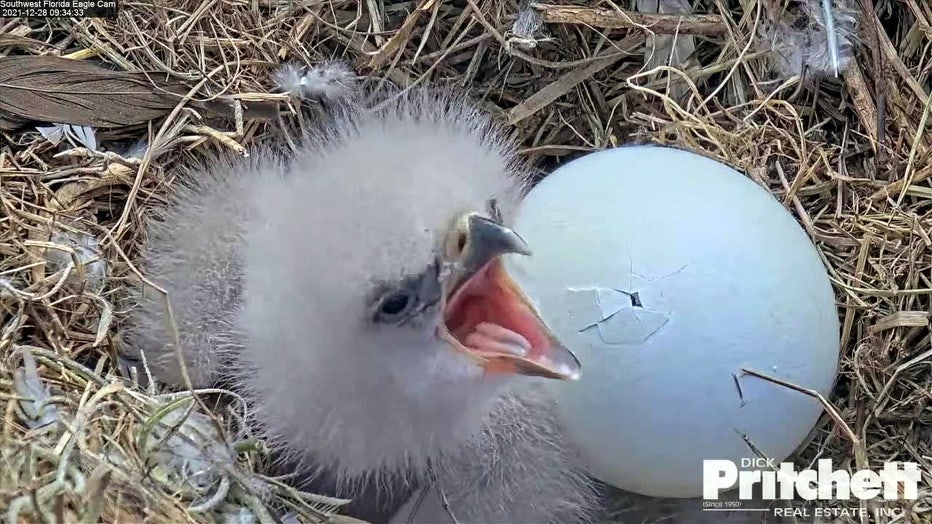 Florida removed it from its list of threatened species the following year. The species is still protected under the Migratory Bird Treaty Act and the Bald and Golden Eagle Protection Act.

In Florida, female bald eagles typically lay up to three eggs between December and January. The incubation period is about 25 days. They typically return to nest territories in the fall to begin nest building or repair, reports FWC.

Their nests are large and usually located within two miles of water. The record-sized nest was in St. Petersburg, Florida, which was 9.5 feet in diameter and 20 feet tall.