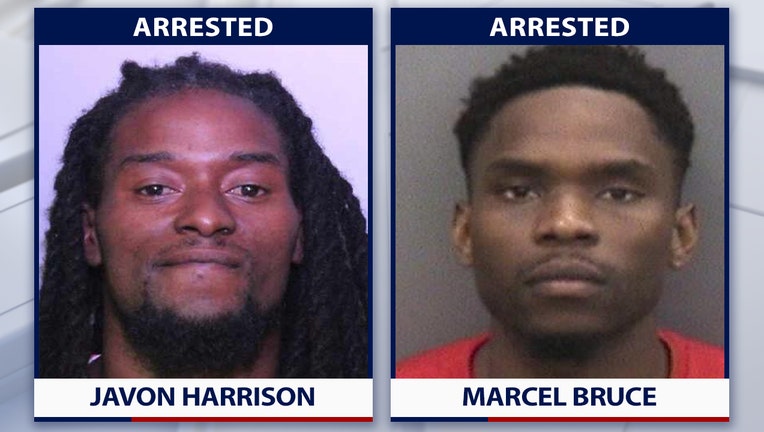 LAKELAND, Fla. - Javon Deshonn Harrison, 26, and Marcel Bruce, 28, have been arrested and are charged with four counts of attempted murder following a shooting that took place Friday in Lakeland.

According to the Polk County Sheriff’s Office, deputies responded to the area of Fort Socrum Village Boulevard in unincorporated Lakeland around 9 a.m. on Friday after receiving complaints of gunfire in the area. When deputies arrived, they said they found four uninjured victims.

One of the victims told the detectives he was outside in the driveway when a black Audi car parked near his residence. He said Harrison, who he recognized because they went to high school together, got out of the passenger side of the vehicle and walked toward him. The driver of the Audi, who detectives identified as Bruce, also got out of the vehicle and walked toward the victim. Both were pointing handguns at him.

Deputies say Harrison fired his handgun at the victim several times, with bullets striking the home and driveway before both he and the driver fled the area in the car.

Like Bruce, Harrison was also charged with four counts of attempted murder and shooting into an occupied home. He has a criminal history that includes a charge of aggravated battery, battery, a criminal traffic violation, and a failure to appear.

"Our detectives did an outstanding job and made a quick arrest. This was not a random incident, and the community can now be assured knowing the primary shooter is in jail," said Polk County Sheriff Grady Judd.