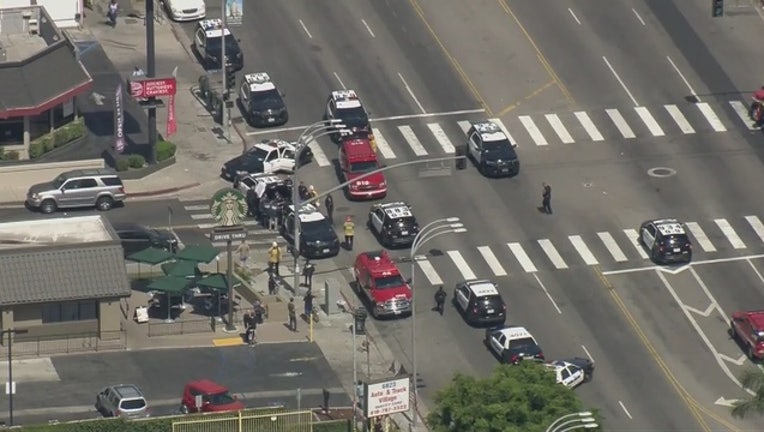 VAN NUYS, Calif. (FOX 11 / CNS) - Two people were injured near a high school in Van Nuys Thursday afternoon when they were hit by gunfire from a shooting outside a Jack in the Box restaurant across the street, prompting a lockdown at the school before two suspects were arrested.

The shooting was reported around noon in the 6800 block of Van Nuys Boulevard, near CHAMPS Charter High School of the Arts.

Los Angeles Police Department Sgt. Barry Montgomery said one of the shooting victims was a woman who worked at the school. The other victim was a teenage boy who attended the school. Their names and ages have not been publicly released, but they were expected to survive their injuries.

The first suspect was located almost immediately near the school's outdoor lunch area and taken into custody, and the second was found a couple hours later.

Montgomery said he could not confirm if the pair were targeted in the shooting or were unintended victims. FOX 11 reported from the scene that the pair were in a crosswalk across from the restaurant and were struck by stray gunfire.

Both victims were seen being placed into ambulances and both appeared to have minor injuries. Los Angeles Fire Department Deputy Chief Trevor Richmond said they suffered from "extremity wounds" and they were both in stable condition.

Police stressed the shooting did not occur on the school campus, but outside the Jack in the Box restaurant. Its proximity to the school, however, prompted parents of students to flock to the area in hopes of retrieving their children.

The LAPD reported just after 3 p.m. that students were being reunited with their parents and the Mayor's Crisis Response Team was on the scene.