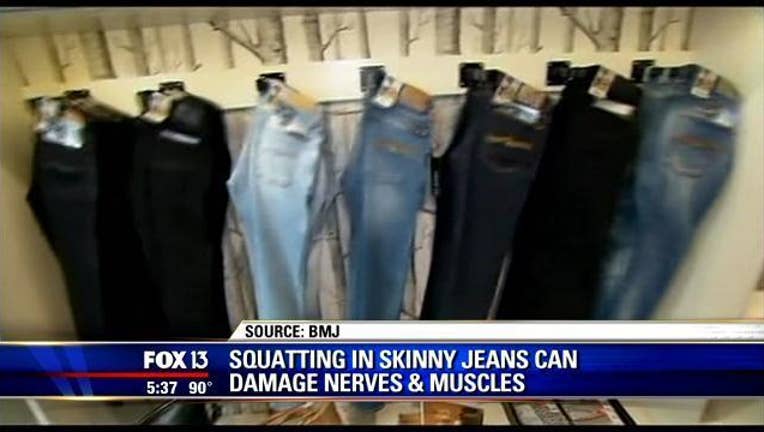 We all know skinny jeans can be uncomfortable but for one woman, wearing them landed her in the hospital with nerve damage.

According to a report in the Journal of Neurological Neurosurgery and Psychiatry, a 35-year-old Australian woman was helping a family member move out of a home. She spent hours squatting down "emptying cupboards" while wearing skinny jeans.

The article says "She...recalled that her jeans had felt increasingly tight and uncomfortable during the day."

Later that evening, while walking home, she had difficulty walking and had foot numbness. She tripped, fell, and, according to the report, spent several hours lying on the ground before someone found her.

By the time she arrived at the hospital, her jeans were so tight they had to be cut off. Her calves were swollen and her CT scan and blood work showed signs that her calf muscles were breaking down, a condition called rhabdomyolysis.

Her neurological exam and studies that measure how well the nerves conduct signals were both abnormal, indicating she was suffering from nerve damage. Because her feet were warm, and she had pulses, her circulation was intact.

Her doctors believe that squatting, compressing the area just below the knee, combined with the tight jeans, caused the problem.

She was treated with IV fluids and was able to walk when she was released from the hospital four days later.

So how do you know if your clothes are too tight? The best thing to do is use your judgment. But if you just can't resist that super snug fit, you might want to recognize the symptoms of nerve damage: pain, burning, numbness, muscle aches, coldness, lightning pain or buzzing (like a cell phone).