DeSantis suspended Broward Sheriff Scott Israel, whose deputies were assigned to protect the school where 17 died in the Parkland massacre.

FORT LAUDERDALE, Fla. - A major Florida sheriff who was appointed by Gov. Ron DeSantis after a high school massacre appears to have lied when he didn't disclose in his job application that he fatally shot another teenager when he was 14 and that he had used LSD, the state ethics commission found Wednesday.

Broward County Sheriff Gregory Tony will now face a public hearing on the accusations or he could pursue a settlement. The ethics commission could recommend that Tony be removed by DeSantis, fined or censured. The hearing has not been scheduled.

The commission overruled a finding by its advocate, Melody Hadley, who concluded that Tony's actions had not violated state statutes. Tony's attorney, Stephen Webster, called the nine-member commission's decision "unprecedented."

"While disappointed in the Commission’s action, my client looks forward to a swift finding of innocence," Webster said in a statement.

DeSantis appointed Tony sheriff of Florida's second most-populous county in January 2019, just days after taking office. He had fired Tony’s predecessor, Scott Israel, for his alleged mishandling of the Marjory Stoneman Douglas High School massacre in February 2018, a decision that was upheld by the Florida Senate.

DeSantis' press office did not immediately respond to an email seeking comment. DeSantis recently suspended four members of the Broward school board after a grand jury found they had not properly overseen security improvements related to the school shooting.

A Florida Department of Law Enforcement report issued earlier this year said Tony repeatedly lied on his police applications, including failing to disclose that he fatally shot an 18-year-old neighbor during a 1993 fight at his family's Philadelphia home. Tony was found to have acted in self-defense and acquitted, but the applications required the disclosure of all criminal arrests no matter the court decision. 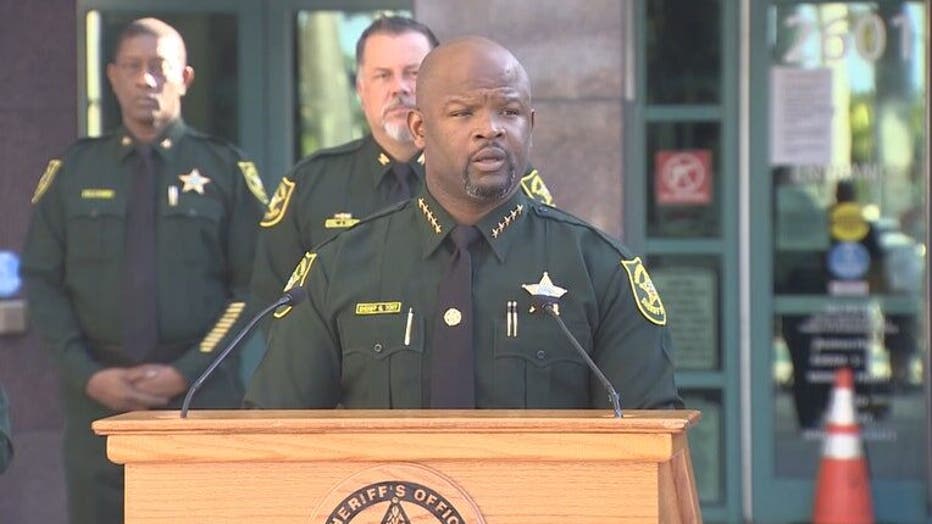 Broward Sheriff Gregory Tony, who was appointed by Gov. Ron DeSantis after he removed Scott Israel from office in the aftermath of the Parkland school massacre.

Tony's attorneys have argued that under Pennsylvania law, juveniles are not charged with crimes but "acts of delinquency," so he has no criminal arrests. The shooting was uncovered in 2020 by the Florida Bulldog news website.

Before becoming sheriff, Tony was hired by the suburban Coral Springs Police Department in 2005. State investigators found that he also falsely answered "no" on that department's hiring questionnaire when asked "Have you ever injured or caused the death of another person?" and "Were you ever in a fight involving a weapon?"

He worked his way up to sergeant before resigning in 2016 to run a police consulting firm that specialized in active shooter training. DeSantis appointed him on the recommendation of the father of a Stoneman Douglas victim who knew Tony from the gym where they both worked out. The vetting process was completed in a day.

The investigation found that in 2003, Tony answered truthfully that he had once used LSD as a teenager when he applied for a job with the Tallahassee Police Department, his first law enforcement application. After that admission caused his rejection, investigators found that on subsequent police applications, Tony answered "no" when asked if he had ever used or handled hallucinogenic drugs.

Investigators say Tony also repeatedly lied on police and Florida driver’s license applications by answering "no" when asked if his license was ever suspended. Pennsylvania suspended his license in 1996 for failing to pay traffic tickets. Tony last answered "no" to that question in 2019 when he applied for a new license shortly after he became sheriff.

In the August 2020 Democratic primary, Tony defeated his predecessor, Israel, who was trying to get his job back. That November, Tony easily defeated his Republican opponent in the general election to win a four-year term.