ST. PETE BEACH, Fla. - A Bay Area business is using mural art to thank its customers for years of success. The mural is the first in the community.

Showing off her husband's custom jewelry brings back fond memories for Anna Hatzilias.

"This is a ring that my husband made a couple of years ago before he died," Anna said, showing one of her prized pieces. "This is another one that he made. It has a natural sapphire."

She and her husband, Chris moved to Florida from Greece in 1972 and open Century Jewelry in 1974.

They started in the old Magnolia Hotel in downtown St. Petersburg. They soon moved to South Pasadena where they have been for more than 40 years. 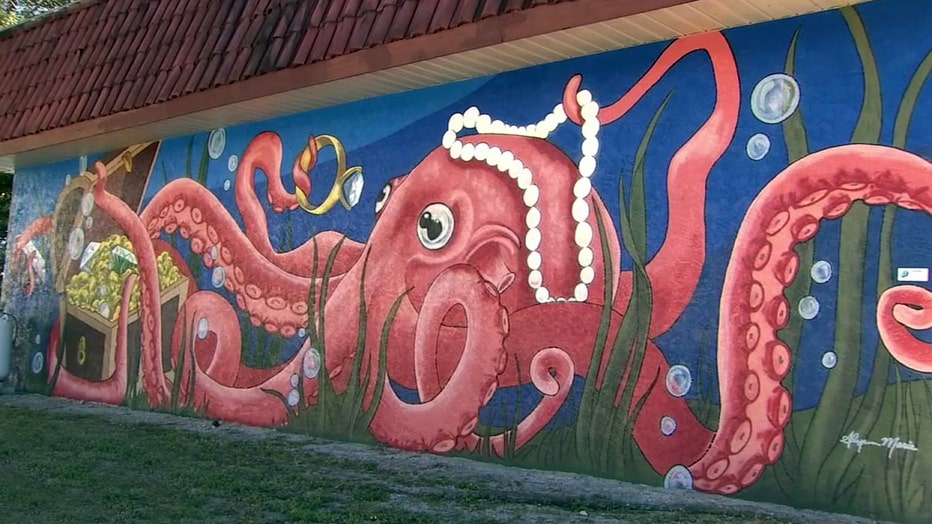 "There have been big changes since then. They were small business. Now it's kind of everything is on the internet. So this is different," Anna's son, Pete said.

He has worked for the business since he was 12. Now, he and marketing director Tara Richter are coming up with ways to beautify the area. Their first idea was to put up the first full side wall mural in South Pasadena.

"I think it's really great that we could provide that to the community, and I think everybody that comes by appreciates that we see people taking pictures all the time and they seem to everybody seems to be enjoying it," Pete said.

An octopus is at the center of the mural's theme and they even had a contest to name the eight-legged creature.

The winning name was Ollie.

"We wanted to do an ‘under the sea’ kind of theme, and octopuses are just, you know, they're beautiful creatures," Tara Richter, director of sales and marketing said. "Plus, we liked all the arms. So it was kind of fun and playful and digging into the sea chest and pulling out like all the jewelry."

The artwork is a sparkling example of a family providing a beautiful piece of art work for their community to enjoy.