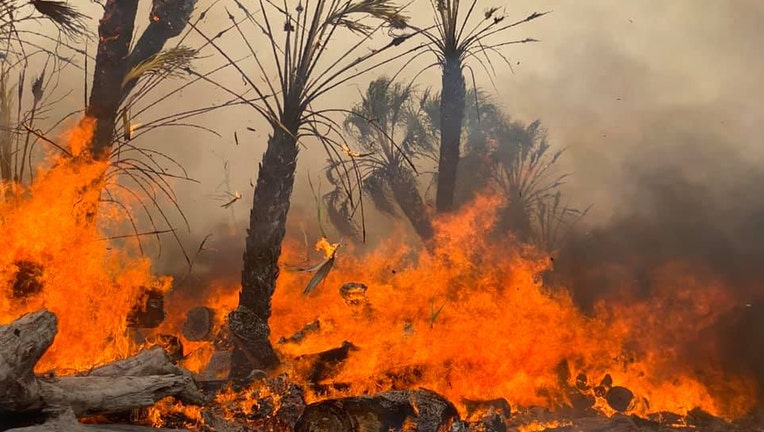 GOLDEN GATE, Fla. - At least seven homes were lost in a brush fire in southwest Florida, and many of the victims say they escaped with nothing more than the clothes on their backs.

The 8,663-acre wildfire fire in Collier County continued to burn over the weekend and was around 40 percent contained as of Sunday. The Florida Forest Service said in a release Sunday morning that 146 firefighters were working to contain the fire.

One man thought he'd lost his father to the blaze. Michael Christensen drove through the fire Wednesday only to find his dad’s trailer engulfed in flames.

Neighbors told Christensen that his dad, also named Mike Christensen, was refusing to leave his home for more than 40 years.

“I couldn’t see anything,” he said. “All I could see was flames. Like dad, dad, where are you dad?”

What Christensen didn’t know at the time was that another neighbor had already grabbed his dad and hauled him to safety, “kicking and screaming,” Michael Christensen’s wife, Patty, said.

Mike Christensen, a heart transplant recipient about 10 years back, recently suffered a stroke. He still struggles to speak, but remains committed to staying on the land.