The SpaceX Crew-3 launch had been postponed multiple times but finally lifted off from Kennedy Space Center just after 9 p.m. Wednesday evening.

CAPE CANAVERAL, Fla. - The SpaceX Crew-3 launch had been postponed multiple times, due to weather and then health issues, but a Falcon 9 rocket finally lifted off from Kennedy Space Center just after 9 p.m. Wednesday evening.

SpaceX’s Crew Dragon spacecraft, named Endurance by the Crew-3 astronauts, successfully separated from the Falcon 9’s second stage at around 9:20 p.m. and began flying on its own.

Roughly five minutes before second stage separation, the first stage of SpaceX’s Falcon 9 rocket successfully landed on a droneship stationed in the Atlantic Ocean. The rocket used for this mission previously flew on SpaceX’s 22nd commercial resupply mission to the International Space Station in June 2021.

The SpaceX Crew-3 launch had been postponed multiple times but finally lifted off from Kennedy Space Center just after 9 p.m. Wednesday evening.

The astronauts are now bound for the International Space Station (ISS) with autonomous docking scheduled for Thursday evening at approximately 6:33 p.m. EST   It was originally scheduled for 7:10 p.m. but NASA said late Thursday afternoon that the ISS arrival was ahead of schedule. The hatch opening and welcome ceremony are also expected to move ahead in the timeline.

NASA said that the Crew-3 astronauts were in good shape.  Their roles for the mission are outlined below:

They will stay on the space station for six months and plan to complete scientific experiments while there.

"Lots of medical experiments. We are testing out medical devices. I am going to be working with a muscle sensor that will help us figure out how muscle atrophy in space but also tech development for this device so that people can have these evaluations done in ICU or when they are out in the field," Marshburn previously explained.

"Everyone is more than qualified, and we are actually super happy to just get the chance to go to space," Chari added.

NASA Administrator Bill Nelson shared his excitement for the mission as well, stating "This is going to be a great mission. We were down for a while after we retired the space shuttle but now we are launching Americans on American rockets from American soil."

Despite a low cloud deck and the threat of rain, Wednesday's launch preparations and the liftoff went without a hitch.

The Crew-3 astronauts finished putting on their SpaceX spacesuits just after 5:30 p.m. and departed the Neil A. Armstrong Operations and Checkout Building for Launch Complex 39A in their Tesla Model X cars. 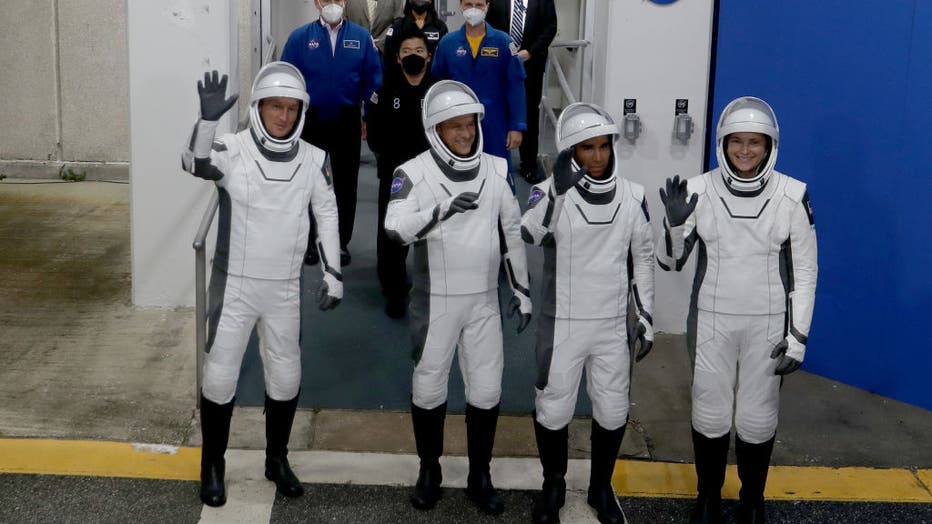 (L-R) European Space Agency astronaut Matthias Maurer of Germany and NASA astronauts Tom Marshburn, Raja Chari and Kayla Barron walk out of the Operations and Checkout Building on their way to the SpaceX Falcon 9 rocket with the Crew Dragon spacecraf

NASA astronauts Tom Marshburn (L) and Raja Chari look to to their families before being driven to the SpaceX Falcon 9 rocket with the Crew Dragon spacecraft on launch pad 39A at the Kennedy Space Center on November 10, 2021 in Cape Canaveral, Florida

Crew-3 was given the go to launch just around 8 p.m.   The hatch had been closed and secured roughly an hour earlier. 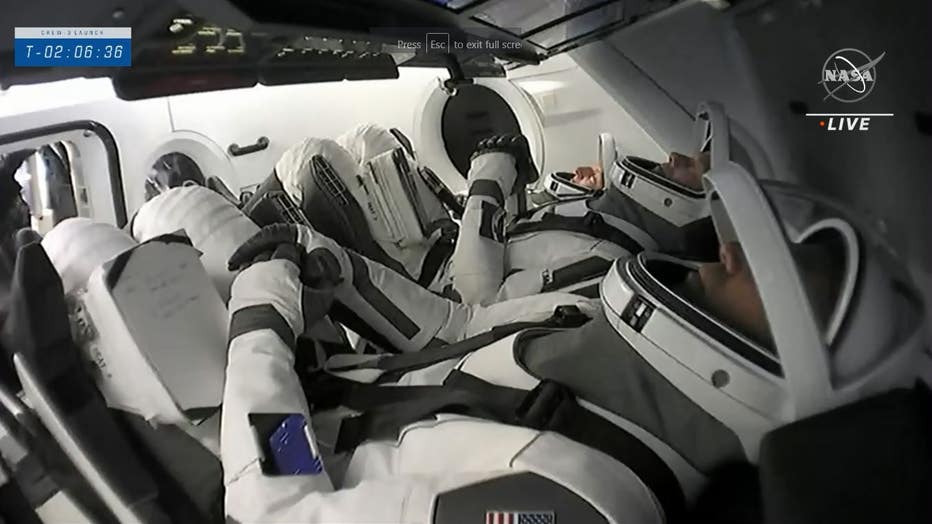 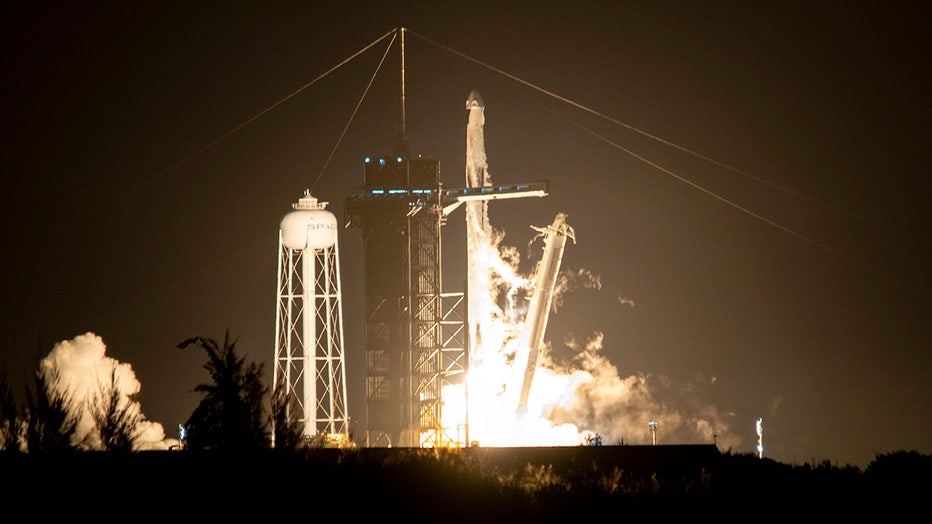 This is the first time that NASA has decided to do an indirect handover of space station crews, meaning that NASA has already brought home the four Crew-2 astronauts at the ISS before launching their replacements. That crew spend 200 days in space and splashed down in the Gulf of Mexico on Monday.