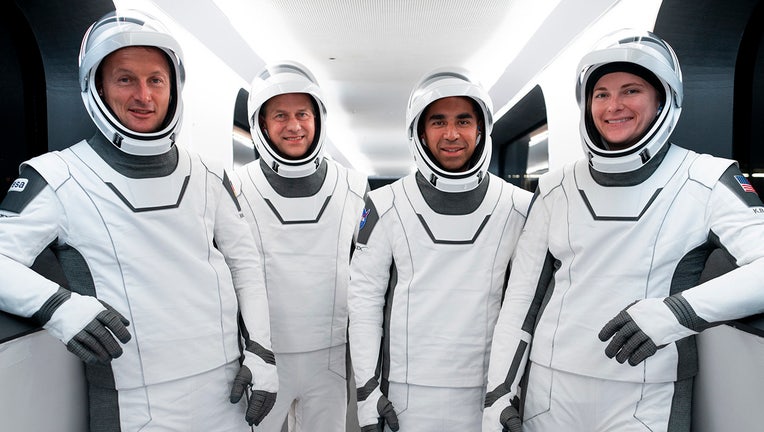 NASA’s SpaceX Crew-3 astronauts participate in a countdown dress rehearsal at the agency’s Kennedy Space Center in Florida on Oct. 28, 2021, to prepare for the upcoming Crew-3 launch. From left are Matthias Maurer, with the European Space Agency, and

CAPE CANAVERAL, Fla. - A medical issue has sidelined one of four astronauts assigned to SpaceX’s upcoming flight to the International Space Station and delayed the launch, officials said Monday.

NASA said the launch is now off until Saturday night at the earliest. Liftoff had been scheduled for this past Sunday, but bad weather offshore bumped it to Wednesday. It’s the first time in decades that a U.S. flight has been delayed by a crew member’s health.

Officials would not say which astronaut is affected. They described it as a "minor medical issue" and said it is unrelated to COVID-19. The one German and three U.S. astronauts — who range in age from 34 to 61 — have been quarantined for two weeks as usual before a spaceflight.

Once on their way, Raja Chari, Tom Marshburn, Kayla Barron and the European Space Agency’s Matthias Maurer will move into the space station for six months, replacing four astronauts who have been living up there since April. NASA prefers launching the new crew before bringing back the old one so they can have a face-to-face handover, but is considering "all options" in light of the latest delay.

In 1990, a shuttle launch was delayed when the flight’s commander came down with a cold. And in 1970, an astronaut was yanked from Apollo 13 shortly before launch after being exposed to German measles. He never came down with measles, and later joined the herculean effort in Houston to save his colleagues from their aborted moon mission.

More recently, two Russian cosmonauts were replaced a couple months before their 2020 launch to the space station, after one of them suffered an eye injury.

Earlier Monday afternoon, Maurer tweeted a photo of himself on the beach at Kennedy Space Center, holding a large garbage bag.

"I’ve been relaxing during my quarantine by collecting rubbish on the beach," he wrote. "Sadly, this is not the only bag I filled. We really need to think about our environmental impact on Earth and in space. Clean oceans, clean space! It’s up to all of us."