ST. PETERSBURG, Fla. - With the Kansas City Chiefs getting ready for a second consecutive appearance on the biggest night in sports, the defending champions are attracting renewed attention over the team's use of Native American imagery.

The St. Petersburg-based group "Florida Indigenous Rights and Environmental Equality," or FIREE, is planning a protest right outside Raymond James Stadium on Super Bowl Sunday, targeting the Chiefs and the team's fans.

Organizers said they plan to be on the west side of Dale Mabry Highway at Tampa Bay Boulevard, with no plans to try and enter the high-security stadium on game day.

In a Facebook page for the planned demonstration, as of Thursday morning less than 30 people had indicated they will be joining in. Organizers accuse the Chiefs of using racial stereotypes and degrading Native American culture with face paint, head-dresses, and chants that mock indigenous cultures. 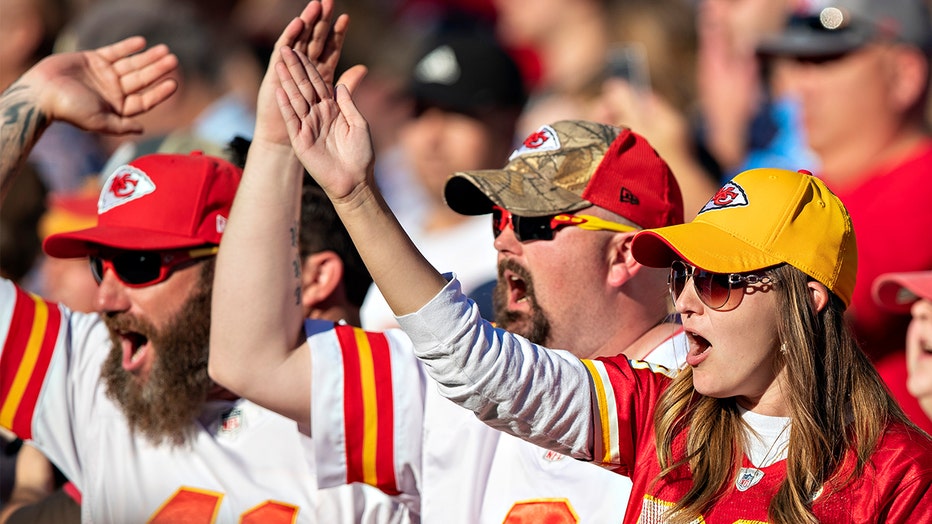 Fans of the Kansas City Chiefs do the tomahawk chop in the second half of a game against the Tennessee Titans at Nissan Stadium on November 10, 2019 in Nashville, Tennessee. The Titans defeated the Chiefs 35-32. (Photo by Wesley Hitt/Getty Images)

This comes amid a wider push for sports teams to stop using indigenous names and imagery as team names and mascots. In December 2020, Cleveland's baseball team announced it was dropping its Indians team name, along with the cartoonish Chief Wahoo logo. Earlier in the year, the Washington Football Team dropped the use of the name Redskins.

ALL STORIES: Super Bowl in Tampa

The Chiefs did make some changes in the fall of 2020, banning the headdresses and warpaint from their home stadium. Officials also made a subtle change to the team's signature "arrowhead chop," with cheerleaders using a closed fist instead of an open palm to signal the beating of a drum.

"Now the team wants to backtrack and say we are being culturally appropriate and we are being respectful of indigenous people by saying no headdresses," she said. "And that is a good start, but the fans are still operating as if it is an indigenous-type atmosphere because you are still called the Chiefs. And you can still do this movement that looks like a tomahawk chop, but we are going to call it a drum beat instead. It is kind of silly. Just change it."

While it's a start, critics say this does not go far enough. They argue that even the "drumbeat" conjures images of indigenous people as savages. Some also want to see the name Chiefs dropped from the team. A few thousand people have signed onto two online petitions, one of them launched by a fourth-grade student.

Fans of the Chiefs long ago adopted the chanting and arm movement symbolizing the brandishing of a tomahawk that began at Florida State University in the 1980s.

"When we are down it is a rally cry," said Kile Chaney, a 42-year-old stone mason from Harrisonville, Missouri. "Just to hear all the fans doing the tomahawk chop and hear it echo through the corridors, it is a beautiful noise that we make here."

Aaron Bien, a 61-year-old automotive repair and body shop owner from Hillsdale, Kansas, described it as no different than any cheer.

"It is the soul. It is the lifeblood," said Bien, who had been a Chiefs season ticket holder for 15 years before the pandemic limited seating capacity in the stadium this season.

He said the chop has "nothing to do with Native Americans," noting that the origin of the Chiefs nickname may have more to do with the mayor who helped lure the franchise from Dallas in 1963.

Fans warned to watch for counterfeits

As the Super Bowl gets closer, law enforcement are cracking down on fake and counterfeit merchandise.

Mayor H. Roe Bartle was a large man known as "The Chief" for his many years of leadership in the Boy Scouts. Team owner Lamar Hunt reportedly named the team the Chiefs in honor of Bartle.

Chiefs president Mark Donovan has said that the team will continue to have discussions on cultural sensitivity and continue to make changes going forward in an effort to celebrate the fan experience while respecting and honoring Native American heritage.