Gulfport continues to clean-up after Eta

GULFPORT, Fla. - Tropical Storm Eta's damage to the Bay Area was extremely minimal, but there are still some remnants of the storm left behind. In Gulfport, six sailboats were left high and dry as a result of the wind and the waves. Now, the big job of getting the boats off the beach and to where they need to go remains.

Cranes arrived along Gulfport Beach on Sunday to remove two of the boats off of the shore. As of Monday morning, four other boats still needed to be removed, but those boat owners came prepared.

Two of the four boats are scheduled to be lifted back into the water Monday. Crines will arrive in the morning hours to move the boats closer to shore. When high tide arrives by the afternoon, the sailboats will be towed.

However, besides the boats, the city has their work cut out for them. Gulfport City Councilwoman Christine Brown told FOX 13 she hasn’t seen a storm surge this intense along Gulfport Beach in 30 years. That storm surge would explain some of the damage that is still there along the beach.

"There's insurance going on, FEMA might step up and since it was a state of emergency they might come up and offer some assistance as well," she said. 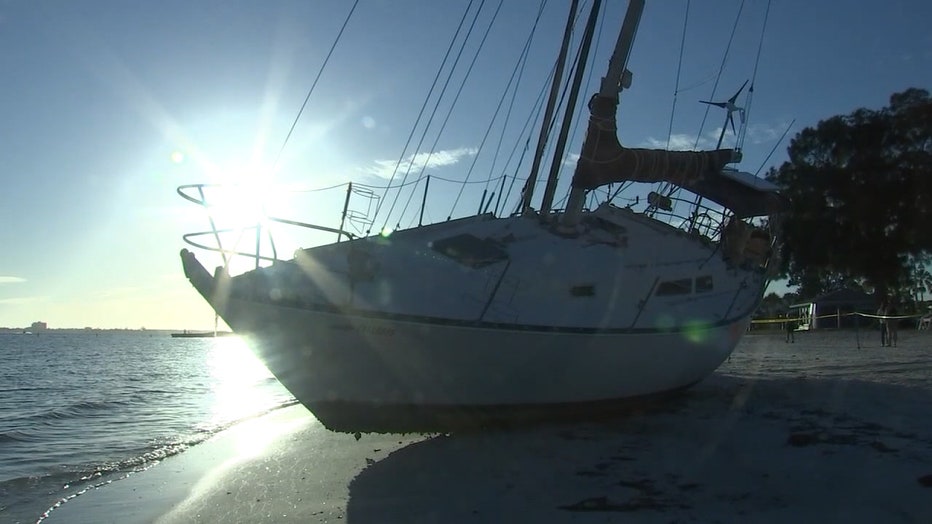 Many businesses were able to get cleaned up over the weekend, and most have reopened. However the dock at the beach near Gulfport Casino is going to need some work. It’s currently closed to the public as crews have deemed it a safety hazard due to all the damage it received from the sailboats being pushed ashore.

In an effort to make sure the two boats can be safely dealt with, the City of Gulfport says that the east side of Shore Boulevard will remain closed until at least 8 a.m. so the cranes have room to work.