A June 24-30 survey showed 25.5 percent of respondents aged 18-24 years had seriously considered suicide in the past month.

WASHINGTON - People in crisis and those trying to help them will have a new phone number — 988 — to reach the national suicide prevention network starting in July. On Monday, federal health officials announced more than $280 million to smooth the transition from the current 10-digit number to three digits.

Three-digit dialing to reach suicide hotline counselors has long been a goal for mental health advocates, lawmakers in Congress, the Federal Communications Commission and the telecommunications industry. The Biden administration says it wants to help deliver an on-schedule launch this summer. The new 988 number will also handle text and chat.

"We know that remembering a three-digit number beats a ten-digit number any day, particularly in times of crisis, and I encourage every state to rev up planning to implement 988 for the sake of saving lives," Health and Human Services Secretary Xavier Becerra said in a statement.

Mental health experts are hoping that the three-digit number will deliver a breakthrough in assisting people in crisis who may otherwise try to harm themselves. They predict call center demand will skyrocket once the new system is in place and people know about it.

People who call, text or chat 988 will be able to reach trained counselors who belong to the National Suicide Prevention Lifeline network. Counselors at more than 180 local centers listen to people in crisis and provide support, connecting them with other services as may be needed. According to the Lifeline, the new dialing code will be available throughout the country starting July 16. 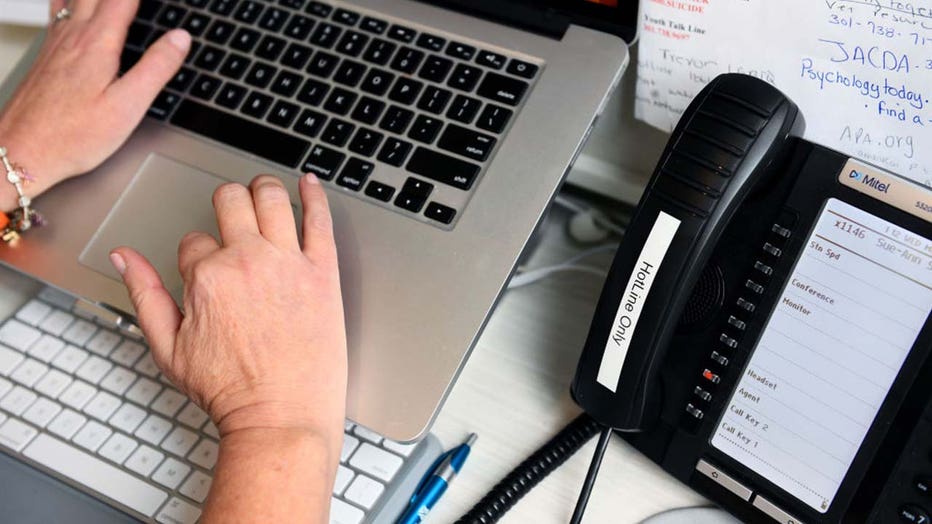 FILE - Woman works on laptop next to phone for a suicide hotline in Maryland.

Of the $282 million announced Monday, $177 million will go to bolster and expand the existing crisis network's operations and telephone infrastructure, including centralized chat and text response, backup capacity and a sub-network for Spanish-speakers.

The rest of the money, $105 million, will go to build up staffing at local call centers.

Suicide had been the 10th leading cause of death in the United States, claiming more than 47,000 lives in 2019, but dropped to 11th in 2020, mainly due to the coronavirus pandemic, which killed at least 345,000 Americans and became the nation’s No. 3 killer.

Suicide attempts result in more than 300,000 people seen in hospital emergency departments for self-harm injuries. Rates of suicide rose steadily over much of the last 20 years, and it remains a leading cause of premature death for people from their teens well into their 50s.

Recently, the FCC voted unanimously to require phone companies to support texting to 988 as well. Commissioners said nowadays many people may be more inclined to text and the choice of voice or text should make no difference when someone in distress is trying to find help.

The national suicide prevention network currently relies on a 10-digit number, 800-273-TALK (8255), to route calls to crisis centers. The country’s largest cellphone companies, AT&T, T-Mobile and Verizon, already support calling 988, according to the FCC. The service may already be available in some parts of the country, although not every community has access yet.

The lifeline has received more than 20 million calls since its inception in 2005, with nearly 2.4 million last year, according to the network's website. Its current 10-digit number will remain available even after 988 is launched.