PALM HARBOR, Fla. - Amid the devastation left behind by Hurricane Ian are the many animal shelters to the south of Tampa Bay that are now scrambling to keep pets safe and healthy. Some have lost everything as others run out of supplies.

There's a local animal group rallying the masses for help. On Wednesday morning, a rescue team from Suncoast Animal League loaded up a caravan of donated pet supplies before heading 120 miles south for the Port Charlotte area. The donations poured in on Monday and Tuesday after the shelter organized a supply drive for shelters overcome by the disaster.

Over the weekend, Suncoast Animal League rescued dozens of pets from Hardee County Animal Control, which was left without power or running water in the wake of the hurricane. At one point the facility was down to one staff member and one volunteer caring for the animals. Another staff member suddenly found themself homeless and couldn't report for work.

Returning from their initial trip to Hardee County, the Suncoast rescue team reported that multiple shelters in the region were in the dark, their faucets running dry with no air conditioning in the Florida heat. 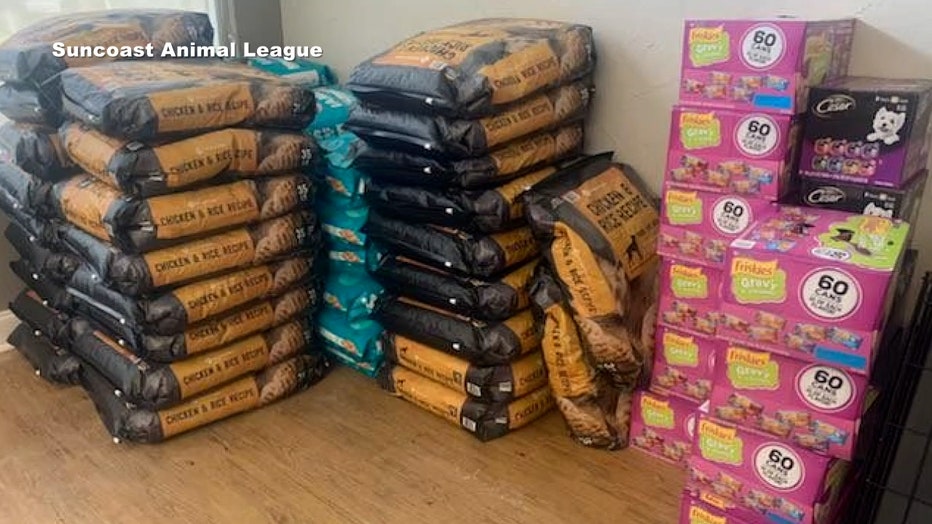 Donations given to the Suncoast Animal League to help animal shelters impacted by Hurricane Ian.

"While our parking areas are filled with the vehicles of volunteers and visitors, theirs teemed with flood waters from the surge and fish swimming by," Suncoast Animal League said in a Monday Facebook post. "Their own homes are in shambles, but they are onsite at their shelter caring for their animals. But their struggle is not just keeping their shelter cats and dogs fed and watered. Their community of animal owners is now running out of supplies for their pets and are turning to Animal Welfare League of Charlotte County for help."

This is where the hurricane relief supply drive comes in. On Monday and Tuesday, Suncoast collected pet supply donations at locations all across Tampa Bay, reminding people on social media that "for days leading up to Ian’s landfall, everyone in the Tampa Bay Area expected to take the hit. It could have been us, but we got lucky. Let’s help those who were not so lucky. And remember, it could be us one day."

They're recommending people bring them to other shelters or hang on to them for just a little while longer until they have room. After Hurricane Ian, their dog kennels ended up over capacity for a number of reasons.

In the days that followed, donors answered the call. By Tuesday morning organizers said that in only 24 hours, they'd collected so many donations- items like bedding, pet food, and blankets-- that they may have to make a second trip to get all of the supplies to the shelters to their south.

In a video taken around 6 p.m. Tuesday and later posted to Facebook, Suncoast Animal League executive director Rick Chaboudy showed the overwhelming response to the supply drive, with stacks and piles of dog and cat food, towels, and cleaning supplies.

"We have two vans of our own. Those are filling quickly. We have a box truck. Annette just rented a U-Haul van. We're loading that up too. So, this is amazing."

Once the supplies get delivered, the rescue team said it will find out the specific needs regarding cats and dogs at impacted shelters and assist accordingly. Chaboudy said his team is hoping to bring back some pets during the relief trip.