BATON ROUGE, La. - A 12-foot Burmese python that escaped from the Blue Zoo inside the Mall of Louisiana in Baton Rouge Tuesday morning is still missing, according to a zoo spokesperson.

A mall employee reported the snake, named Cara, had escaped her enclosure at the Blue Zoo at about 9:30 a.m. local time, according to the Animal Control and Rescue Center dispatch.

Cara is a rescue, the zoo spokesperson told FOX TV Stations. She is "friendly" and "super sweet," the spokesperson added. 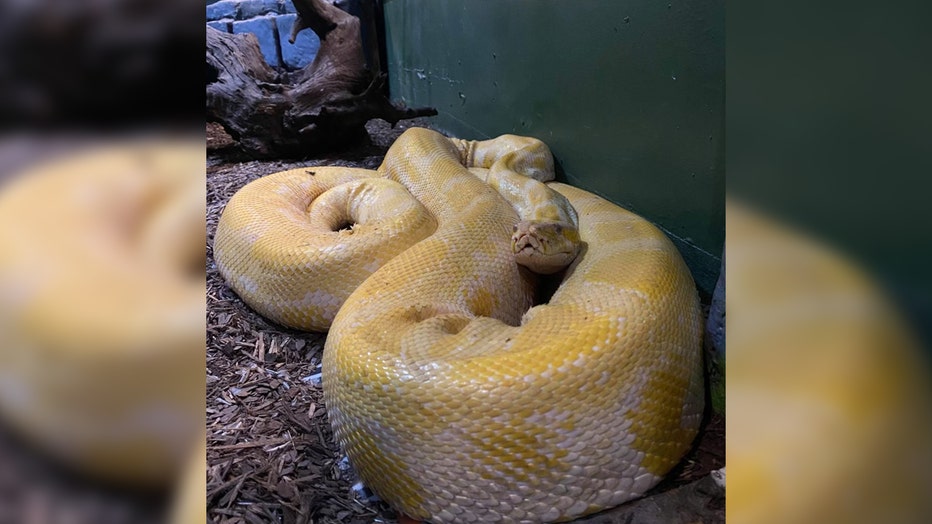 Cara inside her enclosure on June 22.

"She’s part of the snake education show where guests can interact with her," the spokesperson said.

Zookeepers are continuing their search for Cara along with fire, sheriff’s deputies, animal control and police officers.

The zoo has even enlisted the help of reptile specialists to help locate her.

Zookeepers speculate that, since Cara is nocturnal, she won’t emerge again until nightfall, which is most likely when they will be able to recapture her.

The Blue Zoo has voluntarily closed for the day as the search continues for the elusive python.

The zoo spokesperson also emphasized that there is no reason to believe anyone is in danger as Cara is not venomous, "We voluntarily closed for the snake’s safety."

This species of python was brought to America for the exotic pet trade and current wild populations were established "from animals that escaped or were intentionally released," according to the National Invasive Species Information Center.

"Burmese pythons are a threat to native wildlife and ecosystems of South Florida. Their presence has led to severe declines in Everglades mammal populations. They are known to eat imperiled species such as wood storks, Key Largo woodrats, and limpkins, as well as large animals such as alligators, white-tailed deer, and bobcats. They also compete with native predators for food, habitat, and space," according to the CISMA.