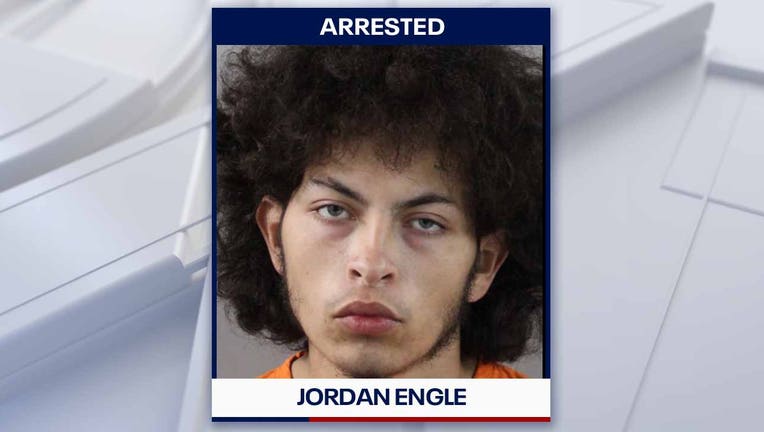 FORT MEADE, Fla. - A man was arrested after strangling a Polk County deputy and threatening to kill him, according to the sheriff's office. During the encounter, the deputy tripped, and the suspect stomped on his head several times.

The sheriff said the agency received a report of a disturbance at a home on Brooke Road in Fort Meade. He said Jordan Engle, the suspect, was dating a 15-year-old and her father basically told him to "get away from my daughter."

A deputy responded to the area and spotted the 18-year-old suspect. The sheriff's office reports the deputy was driving a marked patrol car and was wearing his green agency-issued uniform.

Officials said the deputy exited his vehicle to speak with Engle and ordered him to stop walking. In response, Engle said, "I am going to my house to get something to kill you with."

The deputy continued telling Engle to stop walking, but the suspect continued to ignore him and headed to his home at 1502 Brooke Road, investigators said. As they approached his driveway, the deputy attempted to grab Engle's right arm but the suspect pulled away and began running.

The deputy chased after him, the sheriff's office reported. When they reached the front porch area of the home, Engle stopped running, told the deputy to leave him alone, and said, "I am going inside to get something to kill you," according to an arrest report. Engle began walking up a ramp that led to the front door. The deputy grabbed Engle's right arm again to "prevent Engle from entering the residence for fear that Engle was going to get something from inside and attempt to kill him."

However, Engle pulled away, causing the deputy to trip and fall on the ramp, officials said. At this point, officials said Engle stood over the deputy and began to stomp on the back of the officer's head "four to five times with his right foot."

The Polk deputy grabbed Engle's foot and both fell off the ramp. The impact caused the deputy's radio to break, officials said. Then, Engle wrapped his arm around the deputy's neck from behind and began to choke him, they said.

The deputy was able to pull away, and additional deputies arrived. Engle was arrested.

During an interview, officials said Engle said he knew he encountered a deputy and "that he was not scared of deputies." He said he did not personally know the deputy. According to investigators, Engle also stated he did not remember threatening the deputy.

The deputy left the struggle with lacerations on his neck and knee. There was slight swelling on the back of his head, officials said.