A CMS teacher accused of having sex with a student was found dead along with her husband following a SWAT standoff at a home in Huntersville Wednesday.

HUNTERSVILLE, N.C. - A SWAT situation in Huntersville came to a gruesome end when law enforcement found a CMS teacher who had been accused of having sex with a student and her husband dead inside of their home in an apparent murder-suicide.

According to detectives, a family member of Emma Neil Ogle, 63, called 911 saying Emma Ogle was armed and barricaded inside the home with her husband.

Huntersville police say they received a 911 call from Ogle’s family member saying when they came to check on her and her husband, she had a gun in her hands. Minutes later when police arrived, they say her husband died after being shot. Not long after, officers say Ogle also died from a gunshot.

FOX 46 went to Garringer High where Ogle worked and talked to students who say they're devastated.

“This morning, I believe around 8:44, they told us to wait in first block because they wanted to know if the neighborhood was safe for some reason,” student Brian Flores said.

A CMS high school teacher, who was accused of having sex with a student, and her husband are dead following a SWAT situation at their Huntersville home Wednesday morning, authorities said.

Hours after the incident CMS, who Ogle worked for 14 years, sent out a statement saying:

"Charlotte-Mecklenburg Schools is aware of a tragic situation involving an employee that occurred off-campus and did not involve any student. Nothing is more important than the well-being of our students and staff. Social and emotional supports have been deployed for those affected in our district. Supports will continue to be available for any students or staff who needs them."

63-YEAR-OLD TEACHER ARRESTED FOR HAVING SEX WITH TEENAGE STUDENT

Ogle was hired by CMS in 2005. She was a CTE teacher at Vance High School before going to Garinger. She had been suspended with pay, according to CMS.

Lake Norman Charter Elementary School was on lock-down Wednesday morning while Swansboro Lane and Patterson Road were closed for hours due to the incident, Huntersville Police said.

GET THE FOX 46 CHARLOTTE NEWS APP

The school issued an alert message on their website:

There is police activity in the area, however not on campus. Our students are safe, however, we will remain in this Code Yellow status until police activity has ceased. We will communicate once that occurs. The high school/middle school campus is not affected." 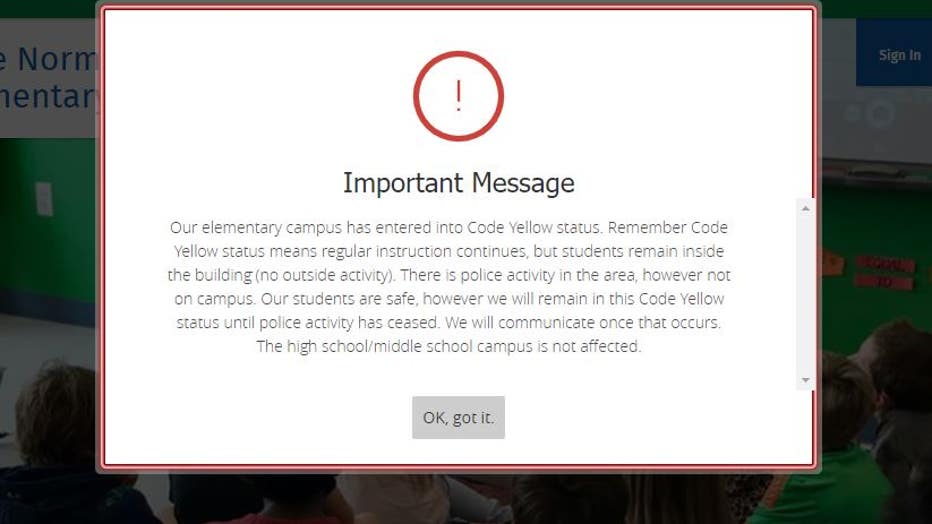 The elementary school is located at 10019 Hambright Road in Huntersville. The lock-down has since been lifted at the school.

"Please avoid the area of the 9800 Blk of Hambright Road due to police activity. Lake Norman Charter Elementary School has been placed on lock-down status," Huntersville police tweeted Wednesday morning.

Afte the traumatic events, many are wishing Ogle's family well.

"I hope they’re doing okay and may God be with them," Flores said.