TAMPA, Fla. - This year couldn't be going any better for Tampa Prep's Santiago Castaneda, who's better known as Santi. The rising high school senior has a lot to celebrate.

He helped lead Tampa Prep to a state soccer championship with an un-defeated season. He was just named Florida's Gatorade Soccer Player of the Year, an award that comes two months after signing a contract with the Tampa Bay Rowdies Academy.

"It's been great, and I'm still pushing through to keep following dreams," Castaneda said.

Santi has been practicing with Rowdies every day since school got out. He made his Rowdies pro debut against The Villages in the Second Round of the U.S. Open Cup at the age of 17.

He's a boy playing among men, and he admits he was a little nervous stepping on the field with older pros.

"The first two weeks I felt kind of weird about it, but overtime these guys they brought me in like I was one of them," said Castaneda. "It felt very comfortable, and now I'm just in it like I'm one of them." 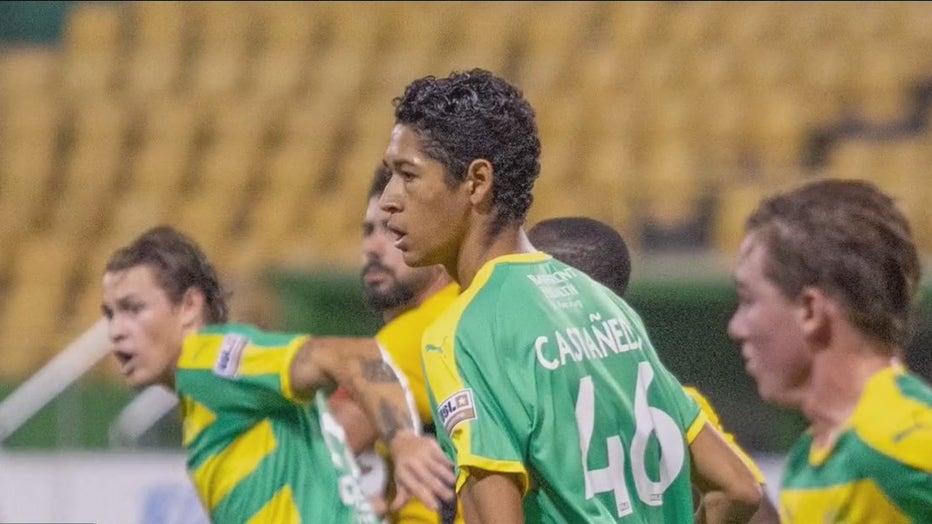 Santi says he's been dreaming about this moment since first playing soccer at the age of three, but at six foot two and 155 pounds he has some work to do.

"It's the first steps for Santi," said assistant coach Jon Stead. "I'm always one of the first to remind him that he's just getting to the start time. Once he fills out a little bit and gets some of his man strength, he probably can play across a couple of positions. He's a good kid."

Santi will be spending part of the summer with the Rowdies and then later in July, he'll head to Denmark to play in an international tournament.

Sanit will be taking his game global on a U-19 squad representing the United States. His career is just getting started.

He plans on finishing high school online and has committed to play college at Michigan, which will gives him two great options depending on his progress.

"It's a great opportunity to have that there just in case and be ready to go," added Castaneda. "Also to have opportunities to make trials and go to pro."

As good as this year has gone, Santi has a bright future ahead.