TARPON SPRINGS, Fla. - For the second time in months, Tarpon Springs city commissioners voted on whether to allow a developer to start building apartments on a 74-acre property along the Anclote River, and this time, they decided to grant a hold on that work.

The Anclote Harbor apartments development has been at the center of lawsuits and a contentious back and forth with environmental groups, the developer, and the city since the project’s approval last November.

Environmental advocates and some residents showed up to Tuesday’s city commission meeting speaking against the approved 404-unit development along U.S. Highway 19 North. The nonprofit group Concerned Citizens of Tarpon Springs requested that the city hold off on granting any work on the property.

"They have filed a motion to stay," said Tarpon Springs City Attorney Thomas Trask, of the Concerned Citizens group petitioning for a hold on the development. "That motion to stay is similar to the motion filed back in December and denied by the commissioners."

Some city commissioners said they wanted to weigh the public interest with traffic safety and environmental concerns, some of the issues previously brought up by the Concerned Citizens of Tarpon Springs in the fall 2021 meetings.

"What we’re asking is for the city to not issue any building permits, grubbing permits where they can go and start clearing the land, anything that they can go out and start removing gopher tortoises," said Peter Dalacos, president of Concerned Citizens of Tarpon Springs. 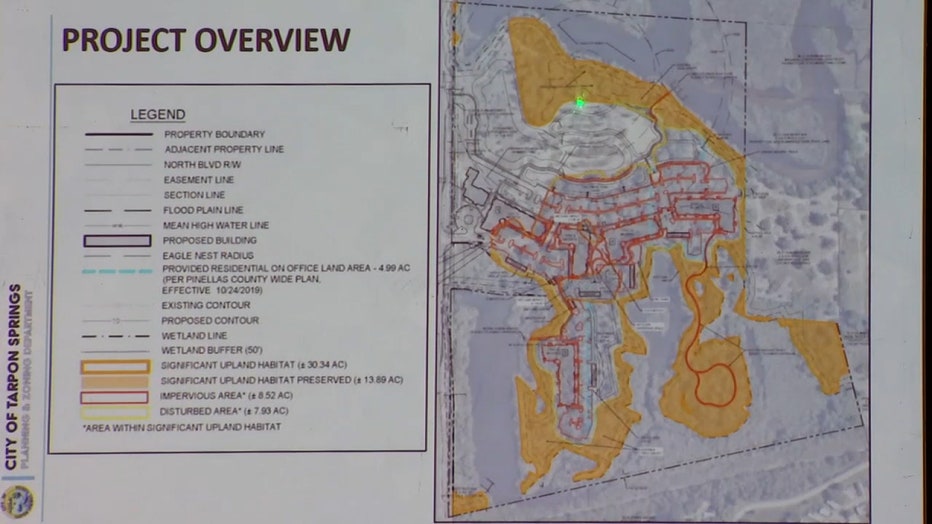 Before adjourning just before midnight, the mayor and three commissioners voted to approve the motion to stay, and one commissioner voted against granting it. The city attorney said the developers can continue to request permits until the commission decides the bond and issues the order which would go into effect immediately.

The Concerned Citizens group is suing Texas developer Morgan Group and the city of Tarpon Springs for how the apartments were approved, so the nonprofit did not want any dirt to move until after the legal process finished with the litigation.

During the meeting, Morgan Group’s attorneys argued the company has a constitutional right to start work.

"If this motion is improperly granted, my client will be damaged, and we don’t want to be damaged. We don’t want to engage in lawsuits. We didn’t bring the lawsuit," said Scott McLaren, an attorney representing Morgan Group.

McLaren said Morgan Group could lose about $2.8 million in money invested so far in the project. City commissioners will meet on July 6 at 6:30 p.m. to decide if there’s going to be a requirement for the bond and what that amount would be. The bond is ultimately an insurance policy for the Morgan Group if they lose time during the stay.

Both sides will have to present their arguments regarding a bond next month.