The meeting began Tuesday evening and was the final vote needed from city commissioners. However, neighbors and activists say they plan to continue to fight against the project in court – and they have a fairly successful track record there. This was the second reading of the proposal.

Last month, during the first reading on the proposal, Tarpon Springs Mayor Chris Alahouzos explained the city does not own the land and therefore has no say in whether the property becomes home to apartments or a new park. The vote focused solely on whether the plan is in line with city code and safety requirements.

"We heard a lot of testimony on both sides two days in a row and the testimony we heard is that the evidence is there and qualifies the project.  Based on that, I made my decision to vote for it," Alahouzos previously said. "It has nothing to do with how I feel about it to build the project. It’s based on what we’re required to do."

PREVIOUS: Developers get pushback on plans for 400-unit apartment complex in Tarpon Springs

A Texas developer, the Morgan Group, wants to build five four-story apartment buildings totaling 404 units in an undeveloped section of Tarpon Springs. With the proposal up for a final vote Tuesday, opponents spent hours urging commissioners to reject the plan. 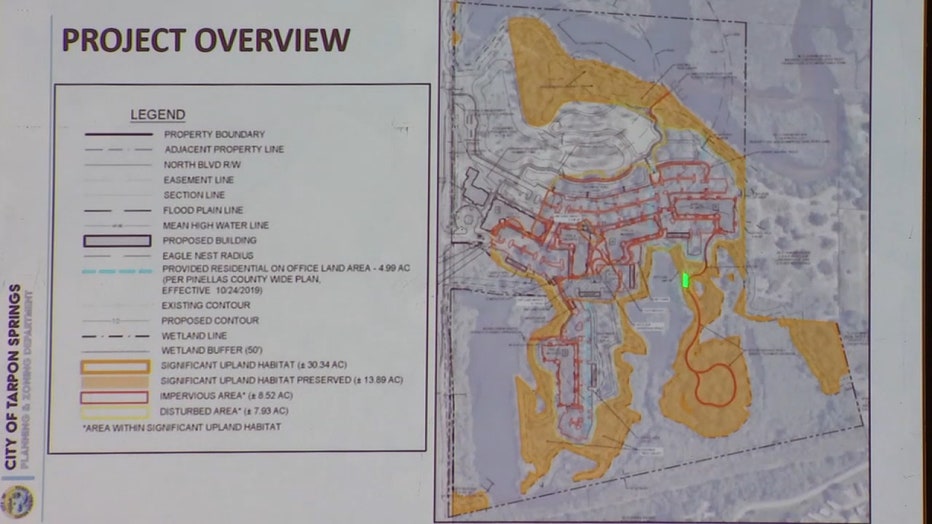 Commissioners heard from the public for the final time Tuesday night and Wednesday morning before signing off on the proposal in a 3-1 vote. The meeting – which wrapped up at 3:30 a.m. – was more sparse than the first reading, which spanned two nights and lasted 16 hours.

Neighbors voiced concerns over the project’s impact on traffic. There would be two access points on U.S. Highway 19 North, adding more drivers to a busy area.

They also expressed concerns about the potential destruction of a natural habitat; sea-level rise and building in a flood zone. The same issues were raised 15 years ago when Walmart attempted to build on the same plot. After years of legal debate, Walmart ultimately moved on to develop in a different location not located on the river.

"If they actually purchase the land…they're going to find out exactly the same procedure is going to be applied to them," said Chris Hrabovsky of SaveTarponSprings.org. "So, another 15 years from now, you're going to be standing me, interviewing me when they try to turn it over to somebody else to try and develop. That's how it's going to end up."

Developers said they will only be building on a fraction of the 74-acre plot of land and that their impact on the environment will be minimal.

"This project is very well-designed and is environmentally-friendly," said Mayor Chris Alahouzos. "The safety of U.S. 19 Highway was addressed and supported by the FDOT."

Opponents of the proposal said their fight is not over.