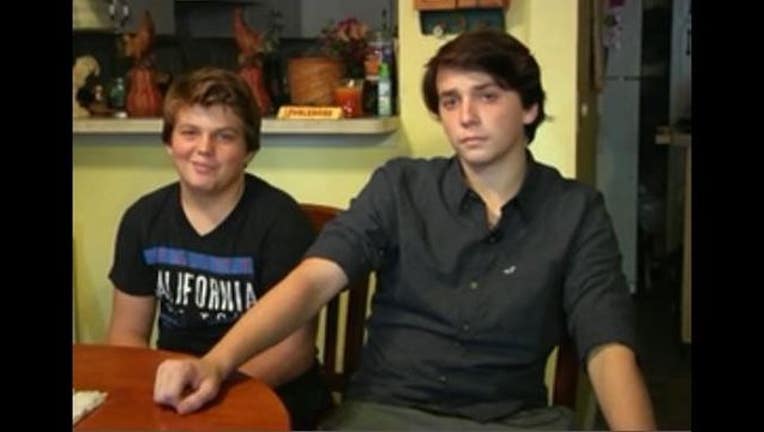 Teenage brothers sometimes do not get along, but after a near-death experience Justin Martin, 16, and his little brother, Nic, 13, couldn't be closer.

The Martin boys and several neighborhood friends were outside playing hide and seek.

As Justin climbed up onto an AC unit trying to hide on a roof, he grabbed a metal pipe.

"I was paralyzed instantly," Justin explained. "It was the worst pain I've ever experienced."

Unbeknownst to Justin, it was electrified. He had 220 volts charging through his body.

"It feels like you're flexing every single muscle in your body," he said. "My neck was cramping, my legs were cramping, and the electricity actually shocked my other arm onto the pole so I ended up having to grab the pole with both of my hands."

Nic stood there in shock and disbelief. He didn't know what to do.

"Honestly, I've never seen him in that kind of pain," Nic said. "I just thought if I don't get him off fast enough, he'll be gone."

Nic tried pulling Justin by his clothes off the pipe, but each time, Nic was shocked.

For about a minute Justin was firmly glued to the pipe with his muscles clinched tighter than he's ever experienced until Nic stepped in.

"I felt like I was tackling a quarterback again," Nic laughed.

The younger brother tackled Justin and brought him to the ground.

The group of boys picked him up and brought him home where their parents called for an ambulance.

Once at the hospital, doctors told Justin, had he not been 6'2 and 185 lbs, the electric charge could have killed him.

Justin said the bond between he and his brother has never been stronger, and he's glad to have a wingman like Nic.

"I'm very thankful that I have him because he helped me and saved my life."