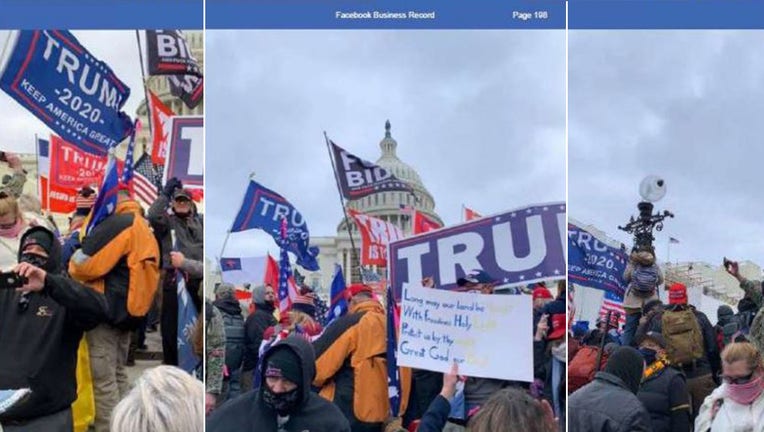 A Texas couple has been arrested and is facing charges after the FBI said they posted photos and video from the siege at the U.S. Capitol on Jan. 6.

The FBI said most of the posts were deleted in the days following the riot but that they still received several tips about the couple’s alleged involvement.

Mark Middleton and Jalise Middleton were arrested on April 21 and are currently both facing numerous charges, including assaulting police officers.

The FBI said the couple hit officers and jabbed flags in officers’ faces and that officers’ body cameras captured evidence of that happening.

Investigators were able to identify the couple after being tipped off about a series of Facebook posts and videos.

On Jan. 7, the day after the deadly riot, the FBI received information about some public posts on Facebook that both Mark and Jalise had made the day prior.

Specifically, the FBI said Mark posted a video with the following caption:  "We are on the front lines. We helped push down the barriers. Jalise and I got pepper sprayed, clubbed, and tear gassed. We had to retreat, but more patriots pushed forward, and they’re taking back our house. They’ve got the giant flag up on the upper terrace up there. No more fooling around! Jalise and I gotta go back to the hotel and try to recoup and change, get dry clothes on. Make America great again! Freedom!"

The FBI said Jalise posted multiple photos, including one that she claimed depicted her face after being pepper sprayed.

The FBI said both also left multiple incriminating comments on their photos and videos, such as saying "we were in the thick of it" and that "the best couldn’t be documented because we were all hands on deck."

Later that month, someone contacted the FBI about the posts, though the tipster said Jalise deleted them about two days later.

And again in February, the FBI got another tip about the couple from an acquaintance who had heard the couple traveled to Washington, D.C. around the time of the riot.

The FBI compared the photos from their Facebook posts to body cam footage from the officers and saw a resemblance and requested an arrest warrant.

RELATED: Suspected Capitol rioter arrested after bragging about siege to a match on Bumble dating app

Facebook is just one of several big tech companies complying with federal requests to preserve evidence on social media amid the Justice Department’s massive probe into the Capitol riot.

A federal law enforcement official told FOX News in January that "a lot" of the cases stemming from the riot "have a social media connection," saying, in certain situations, individuals "blasted" items related to the violence and unrest on social media platforms, which they then attempted to delete after investigations were opened.

The FBI did not specify if it saw the posts before or after they were said to be deleted, though the photos used in the criminal complaint appear to come from a Facebook business record.

They are part of more than 300 suspected rioters charged after a violent mob loyal to former President Donald Trump stormed the U.S. Capitol and forced lawmakers into hiding in an attempt to overturn America’s presidential election, undercut the nation’s democracy and keep Democrat Joe Biden from replacing Trump in the White House on Jan. 6.

Four people died, including a woman shot by police.

A medical examiner has ruled that a Capitol police officer, Brian Sicknick, whose death had previously been linked to the riot, suffered a stroke and died from natural causes. He had been hurt confronting rioters and died several days later.

Investigators initially believed Sicknick was hit in the head with a fire extinguisher, based on statements collected early in the investigation, according to two people familiar with the case. And they later thought the 42-year-old Sicknick may have ingested a chemical substance — possibly bear spray — that may have contributed to his death.