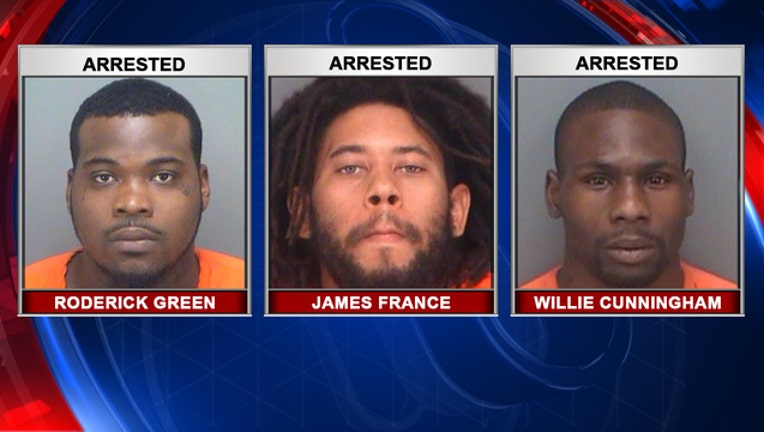 LARGO (FOX 13) - Three men have been arrested in a string of gas station robberies in Pinellas County.

Pinellas County agencies arrested Roderick Green, 24; James France, 24; and Willie Cunningham, 23, deputies announced. The first robbery occurred before 11 p.m. on Saturday at the Citgo located at 8195 Ulmerton Road in Largo. The second robbery occurred on Sunday before 9 p.m. at the Speedway gas station located at 11708 Seminole Boulevard. At 11 p.m. the third occurred at the Circle K gas station at 3170 Tampa Road in Oldsmar.

Deputies said Green and France were the two suspects who committed Sunday’s robberies. Shortly after the Oldsmar robbery, deputies said they noticed a vehicle matching the suspect vehicle description flee from the scene. Deputies followed it until the suspects abandoned the vehicle and ran. K9 deputies found France hiding in the backyard of a Largo home. He sustained a dog bite after refusing to comply with deputies, they say. He was transported to a hospital with a minor injury, but after being discharged, he was arrested and charged with loitering, prowling and resisting arrest without violence. Additional charges are possible, the agency said.

Detectives said they were able to identify Green as the second suspect. He was arrested on Monday and charged with multiple counts of armed robbery.

Cunningham was identified by Largo police detectives as the suspect of armed robberies within city limits. Police did not provide details on the location and times of the alleged crimes. He was arrested by police on Monday night and booked into Pinellas County jail before midnight. Cunningham  was charged with two counts of robbery with a deadly weapon.