A woman who caused a massive pileup during the Tour de France on Saturday was reportedly arrested in France.

The woman who was not immediately identified was taken into custody in Brittany, near where the Tour de France held its first four stages, Reuters reported, citing French media.

BFM Television and RTL both reported, citing police sources, the woman was in custody.

The woman was accused of involuntarily causing injury and faces a more than $1,700 fine, according to Cycling News.

French authorities said the suspect, dressed in blue jeans, a red and white striped shirt and a yellow raincoat, fled the scene before anyone could reach her. She was holding a sign that read "ALLEZ OPI-OMI!" as cyclist Tony Martin and his teammates crashed into her.

According to Ouest-France, the woman fled the scene and may have traveled to Germany. The woman intended to send a message for her grandparents.

Several videos posted on social media showed a spectator holding out a cardboard sign on the side of the road when a rider in the peloton crashed into the sign, causing a massive pileup. 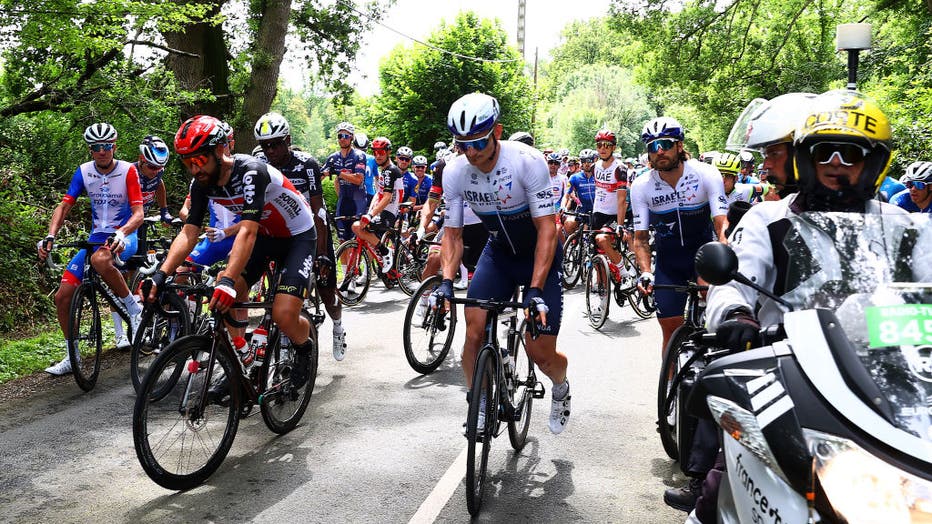 "We are suing this woman who behaved so badly," he said. "We are doing this so that the tiny minority of people who do this do not spoil the show for everyone."

Crashes on the Tour forced riders to urge organizers to implement more safety measures. Riders staged a brief protest during the fourth stage on Tuesday.