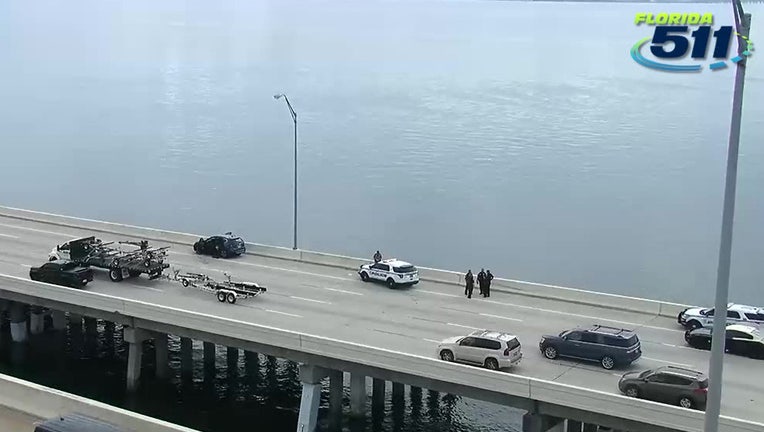 Police and troopers on the scene along the Howard Frankland, seen in this FDOT traffic camera image.

TAMPA, Fla. - Florida Highway Patrol troopers say a man who appears to have shot himself while riding in a vehicle on the Howard Frankland Bridge has died from his injuries. The incident happened just after 11 a.m. Friday on the hump of the bridge's northbound side.

Troopers said the man had a self-inflicted head wound, but it was unclear whether the shooting was accidental or intentional and if it happened while the vehicle was in motion. When troopers got there, the SUV was parked on the south shoulder of the bridge.

The two men inside are residents of Marco Island, aged 23 and 22. Troopers said the younger of the two suffered the 9mm gunshot wound.

One lane of the bridge remained closed for much of the day Friday, snarling traffic headed into Tampa. The scene was finally cleared after 7 p.m.

READ: Arson suspect left behind gas can with name on it, deputies say

Troopers are still investigating what led up to the shooting and who owned the gun.