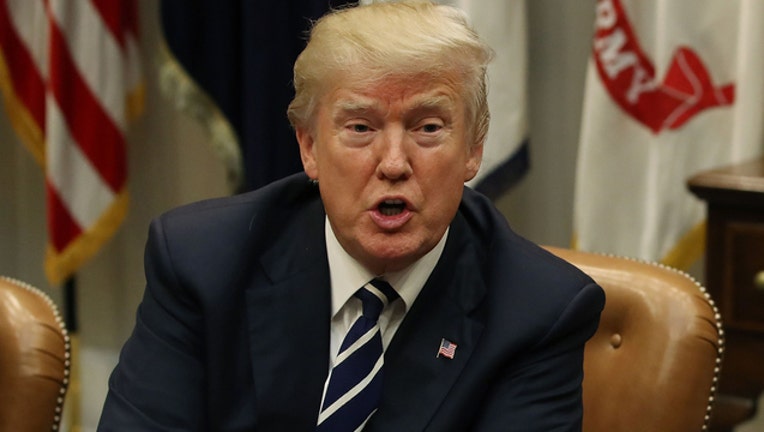 President Donald Trump leads a prison reform roundtable in the Roosevelt Room at the White House, on January 11, 2018 in Washington, DC. (Photo by Mark Wilson/Getty Images)

WASHINGTON - WASHINGTON (AP) — In bluntly vulgar language, President Donald Trump questioned Thursday why the U.S. would accept more immigrants from Haiti and "shithole countries" in Africa rather than places like Norway, as he rejected a bipartisan immigration deal, according to people briefed on the extraordinary Oval Office conversation.

Trump's contemptuous description of an entire continent startled lawmakers in the meeting and immediately revived charges that the president is racist. The White House did not deny his remark but issued a statement saying Trump supports immigration policies that welcome "those who can contribute to our society."

Trump's comments came as two senators presented details of a bipartisan compromise that would extend protections against deportation for hundreds of thousands of young immigrants — and also strengthen border protections as Trump has insisted.

The lawmakers had hoped Trump would back their accord, an agreement among six senators evenly split among Republicans and Democrats, ending a months-long, bitter dispute over protecting the "Dreamers." But the White House later rejected it, plunging the issue back into uncertainty just eight days before a deadline that threatens a government shutdown.

Dick Durbin of Illinois, the Senate' s No. 2 Democrat, explained that as part of that deal, a lottery for visas that has benefited people from Africa and other nations would be ended, the sources said, though there could be another way for them to apply. Durbin said people would be allowed to stay in the U.S. who fled here after disasters hit their homes in places including El Salvador, Guatemala and Haiti.

Trump specifically questioned why the U.S. would want to admit more people from Haiti. As for Africa, he asked why more people from "shithole countries" should be allowed into the U.S., the sources said.

The president suggested that instead, the U.S. should allow more entrants from countries like Norway. Trump met this week with Norwegian Prime Minister Erna Solberg.

Asked about the remarks, White House spokesman Raj Shah did not deny them.

"Certain Washington politicians choose to fight for foreign countries, but President Trump will always fight for the American people," he said.

Trump's remarks were remarkable even by the standards of a president who has been accused by his foes of racist attitudes and has routinely smashed through public decorum that his modern predecessors have generally embraced.

Trump has claimed without evidence that Barack Obama, the nation's first black president, wasn't born in the United States, has said Mexican immigrants were "bringing crime" and were "rapists" and said there were "very fine people on both sides" after violence at a white supremacist rally in Charlottesville, Virginia, left one counter-protester dead.

Republican Rep. Mia Love of Utah, the daughter of Haitian immigrants, said Trump's comments were "unkind, divisive, elitist and fly in the face of our nation's values." She said, "This behavior is unacceptable from the leader of our nation" and Trump must apologize to the American people "and the nations he so wantonly maligned."

Trump has called himself the "least racist person that you've ever met."

Critics also have questioned his mental fitness to serve as president, citing his inability to muster some policy details and his tweets asserting his "nuclear button" is bigger than North Korea's. He responded to such criticism with a recent tweet calling himself "a very stable genius" who is "like, really smart."

The sources spoke on condition of anonymity because they weren't authorized to publicly describe the conversation. One said lawmakers in the room were taken aback by Trump's remarks.

The Trump administration announced late last year that it would end a temporary residency permit program that allowed nearly 60,000 citizens from Haiti to live and work in the United States following a devastating 2010 earthquake.

Trump has spoken positively about Haitians in public. During a 2016 campaign event in Miami, he said "the Haitian people deserve better" and told the audience of Haitian-Americans he wanted to "be your greatest champion, and I will be your champion."

The agreement that Durbin and Sen. Lindsey Graham, R-S.C., described to Trump also includes his $1.6 billion request for a first installment on his long-sought border wall, aides familiar with the agreement said. They required anonymity because the agreement is not yet public.

Democrats had long vowed they wouldn't fund the wall but are accepting the opening request as part of a broader plan that protects from deportation about 800,000 younger immigrants brought to the country as children and now here illegally.

The deal also would include restrictions on a program allowing immigrants to bring some relatives to the U.S.

In an afternoon of drama and confusing developments, four other GOP lawmakers — including hardliners on immigration — were also in Trump's office for Thursday's meeting, a development sources said Durbin and Graham did not expect. It was unclear why the four Republicans were there, and the session did not produce the results the two senators were hoping for.

"There has not been a deal reached yet," said White House spokeswoman Sarah Huckabee Sanders. But she added, "We feel like we're close."

Underscoring the hurdles facing the effort, other Republicans also undercut the significance of the deal the half-dozen senators hoped to sell to Trump.

"How do six people bind the other 94 in the Senate? I don't get that," said No. 2 Senate Republican John Cornyn of Texas.

Cornyn said the six lawmakers were hoping for a deal and "everyone would fall in line. The president made it clear to me on the phone less than an hour ago that he wasn't going to do that."

The six senators have been meeting for months to find a way to revive protections for young immigrants who arrived in the U.S. as children and are here illegally. Trump ended the Obama-era Deferred Action for Childhood Arrivals program last year but has given Congress until March 5 to find a way to keep it alive.

Federal agencies will run out of money and have to shut down if lawmakers don't pass legislation extending their financing by Jan. 19. Some Democrats are threatening to withhold their votes — which Republicans will need to push that legislation through Congress — unless an immigration accord is reached.

Cornyn said the real work for a bipartisan immigration deal will be achieved by a group of four leading lawmakers — the No. 2 Republicans and Democrats in both the House and Senate. That group met for the first time this week.

The immigration effort seemed to receive a boost Tuesday when Trump met with two dozen lawmakers and agreed to seek a bipartisan way to resuscitate the program. The group agreed to also include provisions strengthening security — which for Trump means building parts of a wall along the border with Mexico — curbing immigrants' relatives from coming here and restricting the visa lottery.

Many Democrats would oppose providing substantial sums for Trump's campaign promise to build a wall along the border with Mexico. Many Hispanic and liberal members of the party oppose steps toward curtailing immigration such as ending the visa lottery and restricting the relatives that legal immigrants could bring to the U.S.

Among Republicans, some conservatives are insisting on going further than the steps that Trump has suggested. They want to reduce legal immigration, require employers to verify workers' citizenship and block federal grants to so-called sanctuary cities that hinder federal anti-immigrant efforts.